[Verse 2]
Well, my sense of humanity
Has gone down the drain
Behind every beautiful thing
There’s been some kind of pain
She wrote me a letter
And she wrote it so kind
She put down in writin’
What was in her mind
I just don’t see why I should even care

[Verse 3]
Well, I’ve been to London
And I’ve been to gay Paris
I’ve followed the river
And I got to the sea
I’ve been down on the bottom
Of a world full of lies
I ain’t lookin’ for nothin’
In anyone’s eyes
Sometimes my burden
Is more than I can bear

[Verse 4]
I was born here, and I’ll die here
Against my will
I know it looks like I’m moving
But I’m standing still
Every nerve in my body
Is so vacant and numb
I can’t even remember what it was
I came here to get away from
Don’t even hear a murmur of a prayer 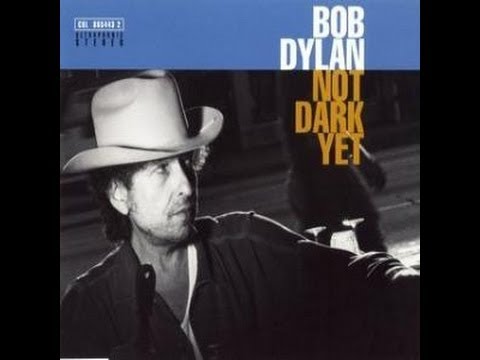 “Not Dark Yet” is a song by Bob Dylan, recorded in January 1997 and released in September that year on his album Time Out of Mind. It was the first single from the album.

Christopher Ricks has remarked on the song’s close affinities to John Keats Ode to a Nightingale.[

“Not Dark Yet” was covered by Robyn Hitchcock for his 2002 album of Dylan covers Robyn Sings, by Eric Clapton during his 2009 Ireland/UK tour, by the Silversun Pickups for the Chimes of Freedom compilation and by Kirsti Huke for her album Deloo. Jimmy LaFave covered the song on his album Cimarron Manifesto; LaFave’s version was used on the Showtime program Californication (Season 3, Episode 3). Trey Gunn and Dylan Nicole Bandy cover this song on the Trey Gunn album “The Waters, They Are Rising.”

The song was covered by sisters Allison Moorer and Shelby Lynne on their 2017 collaborative album “Not Dark Yet“, which takes its name from this track.[3]