[Verse 1]
Johnny’s in the basement, mixin’ up the medicine
I’m on the pavement, thinkin’ about the government
The man in the trench coat, badge out, laid off
Says he’s got a bad cough, wants to get it paid off
Look out kid, it’s somethin’ you did
God knows when, but you’re doin’ it again
You better duck down the alleyway, looking for a new friend
The man in the coon-skin cap in a pig pen
Wants eleven dollar bills – you only got ten

[Verse 2]
Maggie comes fleet foot, face full of black soot
Talkin’ that the heat put plants in the bet book
Phone’s tapped anyway
Maggie says “The Man, he say
They must bust in early May, orders from the D.A.”
Look out kid, don’t matter what you did
Walk on your tip toes, don’t tie no bows
Better stay away from those that carry around a fire hose
Keep a clean nose, watch the plainclothes
You don’t need a weather man to know which way the wind blows

[Verse 3]
Oh, get sick, get well, hang around a ink well
Hang bail, hard to tell if anything is gonna sell
Try hard, get barred, get back, ride rail
Get jailed, jump bail, join the Army if you fail
Look out kid, you’re gonna get hit
By losers, cheaters, six-time users
Hanging ’round the theaters
Girl by the whirlpool’s looking for a new fool
Don’t follow leaders, a-watch the parking meters

[Verse 4]
Oh, get born, keep warm
Short pants, romance
Learn to dance, get dressed
Get blessed, try to be a success
Please her, please him, buy gifts
Don’t steal, don’t lift
20 years of schoolin’ and they put you on the day shift
Look out kid, they keep it all hid
Better jump down a manhole, light yourself a candle
Don’t wear sandals, try to avoid the scandals
Don’t want to be a bum, you better chew gum
The pump don’t work ’cause the vandals took the handles 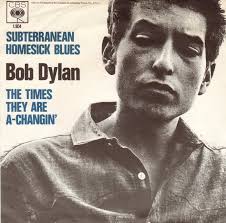 “Subterranean Homesick Blues” is a song by Bob Dylan, recorded on January 14, 1965, and released as a single by Columbia Records, catalogue number 43242, on March 8.[1] It was the lead track on the album Bringing It All Back Home, released some two weeks later.[2] It was Dylan’s first Top 40 hit in the United States, peaking at number 39 on the Billboard Hot 100. It also entered the Top 10 on the singles chart in the United Kingdom. The song has subsequently been reissued on numerous compilations, the first being the 1967 singles compilation Bob Dylan’s Greatest Hits. One of Dylan’s first electric recordings, “Subterranean Homesick Blues” is also notable for its innovative film clip, which first appeared in D. A. Pennebaker‘s documentary Dont Look Back.

An acoustic version of the song, recorded the day before the single, was released on The Bootleg Series Volumes 1–3 (Rare & Unreleased) 1961–1991.

“Subterranean Homesick Blues” is an amalgam of Jack Kerouac, the Woody Guthrie–Pete Seeger song “Taking It Easy” (“Mom was in the kitchen preparing to eat / Sis was in the pantry looking for some yeast”) and the rock’n’roll poetry of Chuck Berry‘s “Too Much Monkey Business“.[3]

Dylan has also stated that when he attended the University of Minnesota in 1959, he fell under the influence of the Beatscene: “It was Jack Kerouac, Ginsberg, Corso and Ferlinghetti.”[5] Kerouac’s The Subterraneans, a novel published in 1958 about the Beats, has been suggested as a possible inspiration for the song’s title.[6][7]

The song’s first line is a reference to codeine distillation and the politics of the time: “Johnny’s in the basement mixing up the medicine / I’m on the pavement thinkin’ about the government”.[2][8] The song also depicts some of the growing conflicts between “straights” or “squares” and the emerging counterculture of the 1960s. The widespread use of recreational drugs and turmoil surrounding the Vietnam War were both starting to take hold of the nation, and Dylan’s hyperkinetic lyrics were dense with up-to-the-minute allusions to important emerging elements in the 1960s youth culture. According to rock journalist Andy Gill, “an entire generation recognized the zeitgeist in the verbal whirlwind of ‘Subterranean Homesick Blues’.”[8]

The song also refers to the struggles surrounding the American civil rights movement (“Better stay away from those / That carry ’round a fire hose“—during the civil rights movement, peaceful protestors were beaten and sprayed with high-pressure fire hoses). The song was Dylan’s first Top 40 hit in the United States.[9]

Listed by Rolling Stone magazine as the 332nd “Greatest Song of All Time”,[10] “Subterranean Homesick Blues” has had a wide influence, resulting in iconic references by artists and non-artists alike. Most famously, its lyric “you don’t need a weatherman to know which way the wind blows” was the inspiration for the name of the American radical left group the Weathermen, a breakaway from the Students for a Democratic Society.[11] In a 2007 study of legal opinions and briefs that found Dylan was quoted by judges and lawyers more than any other songwriter, “you don’t need a weatherman…” was distinguished as the line most often cited.[12][13][14]

John Lennon was reported to find the song so captivating that he did not know how he would be able to write a song that could compete with it.[15][16] The group Firehose (former members of Minutemen) took its name from another of the song’s enigmatic warnings: “Better stay away from those that carry around a fire hose…” In addition, the opening of the last verse, “Ah get born, keep warm”, provided the Australian garage rock band Jet with the title of their debut album Get Born.

In the 1980s sitcom Murphy Brown, a flashback sequence shows Brown (Candice Bergen) and her future head writer (Joe Regalbuto) meeting for the first time in a bar. In order to prove to one another their genuine counterculture credentials from the mid-1960s, they join in a “challenge duet” of the first verse of “Subterranean Homesick Blues”.

Covers of the song span a range of styles, including those by the reggae musician Gregory Isaacs on Is It Rolling Bob?, his 2004 album of Dylan songs, with Toots Hibbert;[17] the bluegrass musician Tim O’Brien on his 1996 album of Dylan covers, Red on Blonde; the rock band Red Hot Chili Peppers on the 1987 album The Uplift Mofo Party Plan; the Cajun-style fiddle player Doug Kershaw on Louisiana Man in 1978; and the singer-songwriter Harry Nilsson on his 1974 album Pussy Cats.[18] The song was also covered by Alanis Morissette when she stood in for Dylan at his 2005 induction into the UK Music Hall of Fame.[19] In addition, Robert Wyatt‘s “Blues in Bob Minor”, on his 1997 album Shleep, uses the song’s rhythm as a structural template.[20] In December 2009, the rapper Juelz Santana released the single “Mixin’ Up the Medicine“, which features lyrics in the chorus, performed by alternative rapper Yelawolf, and maintains some of the song’s original acoustics. Ed Volker of the New Orleans Radiators also has performed the song in his solo shows and with the Radiators, often paired with Highway 61 Revisited.[citation needed] The Arizona band Chronic Future covered the song on their 2004 EP, Lines in My Face. In 1994, The Day Today, a British spoof television news series, claimed that Dylan’s performance was in fact a cover version of an original by ukulele virtuoso George Formby. The programme aired a clip of the purported newly discovered original, showing Formby performing to troops in a black-and-white newsreel with the song overdubbed. Ten years earlier, another British TV series, The Young Ones, featured a performance of the song (in the episode Cash), by a one-off conglomerate called Ken Bishop’s Nice Twelve, featuring high-profile musicians such as Jools Holland, Chris Difford and Stewart Copeland, as well as a number of TV theme composers. In some DVD releases the performance was omitted for contractual reasons but it was restored for a re-release to mark the show’s 25th anniversary.

In 1985, British actor Tom Watt, at the time enjoying a high-profile playing the role of Lofty Holloway in EastEnders, released a version of the song that made number 67 in the UK singles chart.

Allusions in other artists’ songs

Echo & the Bunnymen‘s 1980 song “Villiers Terrace” includes the lyric “There’s people rolling ’round on the carpet / Mixin’ up the medicine.”

The Hayes Carll track “KMAG YOYO” is a direct homage to the rhythms and subject matter of Subterranean Homesick Blues.[21]

The Jesus and Mary Chain‘s 1989 single Blues from a Gun includes the lyric “Look out kid, you’re gonna get hit”, a line borrowed from the Dylan track.

Robert Wyatt‘s song “Blues in Bob Minor” from his 1997 album Shleep includes the line, “Genuflecting, bowing deeply/It don’t take a weathergirl to see/Where the wind is blowing/What the wind is bending.”

The Gaslight Anthem‘s song “Angry Johnny and the Radio”, from their 2007 album Sink or Swim, includes the lyrics “And I’m still here singin’, thinking about the government” and “Are you hidin’ in a basement, mixin’ up the medicine?”

The clip was originally a segment of D. A. Pennebaker’s film Dont Look Back

In addition to its influence on music, the song was used in one of the first “modern” promotional film clips, the forerunner of what was later known as the music video. Rolling Stone ranked it seventh in the magazine’s October 1993 list of “100 Top Music Videos”.[22] The original clip was the opening segment of D. A. Pennebaker‘s film Dont Look Back, a documentary on Dylan’s 1965 tour of England. In the film, Dylan, who came up with the idea, holds up cue cards with selected words and phrases from the lyrics. The cue cards were written by Donovan, Allen Ginsberg, Bob Neuwirth and Dylan himself.[8] While staring at the camera, he flips the cards as the song plays. There are intentional misspellings and puns throughout the clip: for instance, when the song’s lyrics say “eleven dollar bills”, the poster says “20 dollar bills”. The clip was shot in an alley close to the Savoy Hotel in London. Ginsberg and Neuwirth are briefly visible in the background. For use as a trailer, the following text was superimposed at the end of the clip, Dylan and Ginsberg are exiting the frame: “Surfacing Here Soon | Bob Dylan in | Don’t Look Back by D. A. Pennebaker”. The Savoy Hotel has retained much of its exterior as it was in 1965, and the alley used in the film has been identified as the Savoy Steps.[23]

In addition to the Savoy Hotel clip, two alternate promotional films were shot: one in a park (Embankment Gardens, adjacent to the Savoy Hotel) where Dylan, Neuwirth and Ginsberg are joined by Dylan’s producer, Tom Wilson, and another shot on the roof of an unknown building (actually the Savoy Hotel)[citation needed]. A montage of the clips can be seen in the documentary No Direction Home.

The film clip was used in September 2010 in a promotional video to launch Google Instant.[24] As they are typed, the lyrics of the song generate search engine results pages.

The “Subterranean Homesick Blues” film clip and its concepts have been imitated by a number of artists. Influenced and imitative videos of note include the following: