[Verse 2]
Now if you see Saint Annie
Please tell her “Thanks a lot”
I cannot move
My fingers are all in a knot
I don’t have the strength
To get up and take another shot
And my best friend, my doctor
Won’t even say what it is I’ve got

[Verse 4]
Up on Housing Project Hill
It’s either fortune or fame
You must pick one or the other
Though neither of them are to be what they claim
If you’re lookin’ to get silly
You better go back to from where you came
Because the cops don’t need you
And man, they expect the same

“Just Like Tom Thumb’s Blues” is a song written and performed by Bob Dylan. It was originally recorded on August 2, 1965, and released on the album Highway 61 Revisited. The song was later released on the compilation album Bob Dylan’s Greatest Hits Vol. II and as two separate live versions recorded at concerts in 1966: the first of which appeared on the B-side of Dylan’s “I Want You” single, with the second being released on The Bootleg Series Vol. 4: Bob Dylan Live 1966, The “Royal Albert Hall” Concert. The song has been covered by many artists, including Gordon Lightfoot, Nina Simone, Barry McGuire, Judy Collins, Frankie Miller, Linda Ronstadt, the Grateful Dead, Neil Young, The Black Crowes, and Bryan Ferry. Lightfoot’s version was recorded only weeks after Dylan’s original had been released and reached #3 on the national RPM singles chart. In addition, the song was sampled by the Beastie Boys for their song “Finger Lickin’ Good.”

“Just Like Tom Thumb’s Blues” has six verses but no chorus. The song’s lyrics describe a nightmare vision of the narrator’s experience in Juarez, Mexico, in which he encounters sickness, despair, prostitutes, saints, shady women, corrupt authorities, alcohol and drugs, before finally deciding to return to New York City. The lyrics incorporate literary references to Malcolm Lowry‘s Under the Volcano, Edgar Allan Poe‘s “The Murders in the Rue Morgue” and Jack Kerouac‘s Desolation Angels, while the song’s title references Arthur Rimbaud‘s “My Bohemian Life (Fantasy)”. William Ruhlmann of the AllMusic website has described the song as a comic tour de force and music journalist Toby Creswellincluded it on his list of the 1001 greatest songs of all time. Music critic Dave Marsh ranked the live version of “Just Like Tom Thumb’s Blues” from Liverpool that was released as the B-side of “I Want You” as the number 243 greatest single of all time. 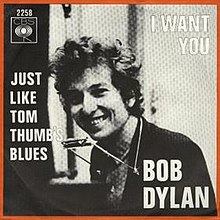 “Just Like Tom Thumb’s Blues” was recorded on August 2, 1965, at Columbia Studios in New York, the same day Dylan recorded “Ballad of a Thin Man“, “Highway 61 Revisited” and “Queen Jane Approximately“, three other songs that would appear on Highway 61 Revisited.[1][2][3] However, “Just Like Tom Thumb’s Blues” took more attempts to perfect than the other songs recorded that day; it wasn’t until take 16 that Dylan and his band captured on tape the version that was released on the album.[2] The backing musicians on the take that was used on Highway 61 Revisited were Mike Bloomfield on electric guitar, Al Kooper on Hohner Pianet; a type of electro-mechanical piano, Paul Griffin on piano, Harvey Brooks on bass guitar and Bobby Gregg on drums.[2]

According to Dylan biographer Clinton Heylin, on early takes of the song, Sam Lay was the drummer and Frank Owens played piano.[2] In Heylin’s opinion, Gregg’s jazzier drumming and Griffin’s more fluid piano playing better communicated the feeling of dislocation that Dylan desired for the song.[2] Take 5 of the song, which, according to Heylin, featured both Lay and Owens, was included on the 2005 album The Bootleg Series Vol. 7: No Direction Home: The Soundtrack.[2] In 2015, the entire recording session was released on the 18-disc edition of The Bootleg Series Vol. 12: The Cutting Edge 1965–1966, while the 2-disc version of the album featured Take 3 and the 6-disc edition contained Takes 1, 3 and 13.[4]

Lyrically, “Just Like Tom Thumb’s Blues” continues the theme of road weariness from the album’s previous song, “Highway 61 Revisited.”[5] The singer finds himself in Juarez, Mexico, at Easter time, amidst sickness, despair, whores and saints.[6] While there, he encounters corrupt authorities and women of dubious character, named in the song as “Saint Annie” and “sweet Melinda”, before seeking succor in drugs and alcohol.[7] The song establishes a nightmare vision as the singer is influenced by gravity, negativity, sex, drugs, drink, illness, remorse and memory.[6][8] In the song’s final verse, the singer decides he has had enough and finds the means to leave it all behind and head back to New York City, where things may be better.[6] Author Paul Williams has noted that scene and situation are combined into a gorgeous evocation of muddied consciousness in “Just Like Tom Thumb’s Blues”, without ever resolving into a clear picture of what the song is about.[9] Despite the sordid details of the singer’s experiences in Juarez, the lyrics maintain a sense of humor, and William Ruhlmann of the AllMusic website considers the song a comic tour de force.[7][10]

During a concert in Sydney, New South Wales, Australia in April 1966, Dylan said of the song, “This is, this is called Tom Thumb. This story takes place outside of Mexico City. It begins in Mexico City and it ends really in Des Moines, Iowa, but it’s all about this painter, he’s a quite older fellow, he comes from Juarez, Juarez is down cross of Texas border, some few feets, and he’s a painter. He’s very very well-known painter in the area there and we all call him Tom Thumb and when Tom Thumb was going through his blue period, this is one of the most important times of his whole life and he’s going to sell many many paintings now taken from his blue period and this is all about Tom Thumb and his early days and so we name this Just Like Tom Thumb’s Blues”[11]

Like many of the songs on Highway 61 Revisited, “Just Like Tom Thumb’s Blues” has abundant literary references, including images recalling Malcolm Lowry‘s novel Under the Volcano and a street name taken from Edgar Allan Poe‘s short story “The Murders in the Rue Morgue“.[6][12] The song also uses the phrase “housing project hill” which is taken from Jack Kerouac‘s novel Desolation Angels.[12][13] A number of Dylan biographers, including Colin Irwin, Robert Shelton and Andy Gill, have suggested that the song’s title makes reference to Arthur Rimbaud‘s poem “My Bohemian Life (Fantasy)”, in which Rimbaud refers to himself as “Tom Thumb in a daze.”[7][12][14] In addition, some commentators have suggested that there may be a musical reference in the lines “And she takes your voice/And leaves you howling at the moon,” since “Howlin’ at the Moon” is the title of a song by Hank Williams, a musician whom Dylan admired.[12][15]

Musically, “Just Like Tom Thumb’s Blues” consists of no chorus, but six verses, varied by a handful of chords and Dylan’s vocal emphasis.[9] Keyboards, drums and vocals provide texture, while Mike Bloomfield plays Latin Americanesque fills on electric guitar.[3][14] The keyboard parts in particular make innovative use of two different pianos, with Al Kooper playing an electric Hohner Pianet and Paul Griffin adding a bar room feel on tack piano.[3][14] In all but the final verse, the even lines rhyme and the odd lines are unrhymed.[16] In the final verse, however, the odd numbered lines rhyme on “ee” and all the even lines rhyme on “uf.”[16] This change in the rhyming pattern provides a subtle sense of finality to the final two lines:[16]

I’m going back to New York City
I do believe I’ve had enough.

Other appearances and acclaim

In addition to its appearance on the Highway 61 Revisited album, “Just Like Tom Thumb’s Blues” was also included on the compilation album Bob Dylan’s Greatest Hits Vol. II (known as More Bob Dylan Greatest Hits in Europe)[7] and on another compilation released exclusively in Europe titled Bob Dylan’s Greatest Hits 2. Alternate takes of the song from the August 2, 1965 recording session have been released on The Bootleg Series Vol. 7: No Direction Home: The Soundtrack[2][17] and The Bootleg Series Vol. 12: The Cutting Edge 1965–1966.[4]

The song has also been popular live in concert. Clinton Heylin has stated that “as performed live in 1965–66, ‘Tom Thumb’ became an inferno of pain. As if pain were indeed art.”[2] A live version recorded at a concert in Liverpool, England on May 14, 1966, featuring Dylan backed by The Band, was released as the B-side to the “I Want You” single in 1966, and later also appeared on the Masterpieces compilation.[2][7][9][18] The song was also performed on May 17, 1966 by Dylan and The Band at the famous and controversial so-called ‘Albert Hall‘ concert (which in fact took place at the Manchester Free Trade Hall) and consequently it appears on The Bootleg Series Vol. 4: Bob Dylan Live 1966, The “Royal Albert Hall” Concert.[19] Dylan also played “Just Like Tom Thumb’s Blues” regularly during his 1974 tour, and has played it in concert occasionally ever since.[7]

In a 2005 reader’s poll published in Mojo magazine, “Just Like Tom Thumb’s Blues” was listed as the number 13 all-time greatest Bob Dylan song.[20] In 2002, Uncutmagazine listed it as the number 38 all-time best Bob Dylan song.[21] Music journalist Toby Creswell included “Just Like Tom Thumb’s Blues” on his list of the 1001 greatest songs of all time and music critic Dave Marsh ranked the live version from Liverpool as the number 243 greatest single of all time and as one of the dozen or so truly great B-sides, noting that it demonstrated Dylan’s prowess as a great live performer.[10][18]

Canadian singer-songwriter Gordon Lightfoot covered “Just Like Tom Thumb’s Blues” in 1965 in a version that reached number 3 on Canada’s national RPM singles chart, and number 8 on Toronto’s CHUM Chart.[13][22][23] Other covers recorded in the 1960s include those by Barry McGuire, on his 1966 album This Precious Time, and Judy Collins, on her 1966 album In My Life.[13] Nina Simone also covered it in 1969 on her To Love Somebody album.[13] Nina Simone’s version differs considerably in tone from Dylan’s: while Dylan’s version is sympathetic, if sneering, towards the foolish subject, Simone’s version is an intense, first-person account of illusions being crushed, until she is finally helpless in the hands of fate.[24]