[Verse 1]
A worried man with a worried mind
No one in front of me and nothing behind
There’s a woman on my lap and she’s drinking champagne
Got white skin, got assassin’s eyes
I’m looking up into the sapphire-tinted skies
I’m well dressed, waiting on the last train

[Chorus]
People are crazy and times are strange
I’m locked in tight, I’m out of range
I used to care, but things have changed

[Verse 2]
This place ain’t doing me any good
I’m in the wrong town, I should be in Hollywood
Just for a second there I thought I saw something move
Gonna take dancing lessons, do the jitterbug rag
Ain’t no shortcuts, gonna dress in drag
Only a fool in here would think he’s got anything to prove

Lot of water under the bridge, lot of other stuff too
Don’t get up gentlemen, I’m only passing through

[Verse 3]
I’ve been walking forty miles of bad road
If the Bible is right, the world will explode
I’ve been trying to get as far away from myself as I can
Some things are too hot to touch
The human mind can only stand so much
You can’t win with a losing hand

[Verse 4]
I hurt easy, I just don’t show it
You can hurt someone and not even know it
The next sixty seconds could be like an eternity
Gonna get low down, gonna fly high
All the truth in the world adds up to one big lie
I’m in love with a woman who don’t even appeal to me

Mr. Jinx and Miss Lucy, they jumped in the lake
I’m not that eager to make a mistake 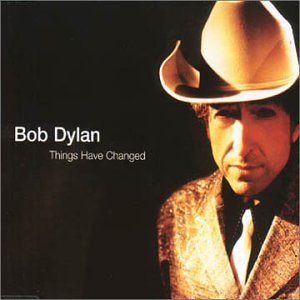 Dylan critics disagree about when this song was recorded. According to Olof Björner, “Things Have Changed” was recorded in May 1999 at Sterling Sound studios in New York.[4]Clinton Heylin, in his account of Dylan’s songs between 1974 and 2008, believes the song was recorded at Sony Studios, New York, probably on 25 and 26 July 1999. During this latter date, Dylan was touring the US with Paul Simon.[5]

Sources agree the musicians who accompanied Dylan in the studio were his touring band at the time: Charlie Sexton and Larry Campbell on guitar, Tony Garnier on bass and David Kemper on drums.[4]

Kemper has said, “We were touring and had a day off in New York. Bob said, “Tomorrow let’s go into the studio. I got a song I want to record. We went in and played “Things Have Changed” with only an engineer. We did two takes. The first was a New Orleans thing. The second was what you hear. So in about five hours we learned it recorded it, mixed it.[5]

Engineer Chris Shaw has confirmed there was another version, which “was really great, which had a kind of New Orleans shuffle to it”. Shaw hoped to include this unreleased version on Volume 8 of Dylan’s Bootleg Series, Tell Tale Signs. But when the studio recording could not be located, it was replaced by a live version recorded in Portland, Oregon, on June 15, 2000, which Heylin describes as “mediocre”.[5]

Clinton Heylin has written that “Things Have Changed” demonstrates a close knowledge of the film Wonder Boys, for which it was written. The lyrics make reference to “dancing lessons”, “the jitterbug rag” and dressing “in drag”, all of which feature in the plot of the film.[5]

Curtis Hanson, the director of Wonder Boys, has recalled: “I learned that Dylan might be interested in contributing an original song… So when I came back from filming in Pittsburgh, Bob came by the editing room to see some rough cut footage. I told him the story and introduced him to the characters. We talked about Grady Tripp and where he was in life, emotionally and creatively. Weeks later a CD arrived in the mail.”[5]

Dylan critic Kees de Graaf places “Things Have Changed” in the context of the Biblical teaching Dylan encountered when he studied with the Vineyard Fellowship in the late 1970s. For de Graff, the sense that “the world may come to an end at any moment” pervades the song. De Graaf notes the images of ” the last train”, “all hell may break loose”, “standing on the gallows with my head in a noose”, all contributing to a sense of impending Armageddon: “the last battle of the end times when all powers from hell will explode in one final outburst of violence.”[6]

Dylan critic Michael Gray has commented on the wide range of sources in the lyrics of the song, describing it as unique for the way it combines the worlds of Percy Bysshe Shelley and Duane Eddy.[7]

“Forty Miles of Bad Road” was a 1959 instrumental hit for Duane Eddy. According to Gray, Eddy’s producer Lee Hazlewood heard one Texan say to another, “Your girl has a face like forty miles of bad road,” and immediately recognised the remark’s potential as a song title.

On March 25, 2001, at the 73rd Academy Awards, “Things Have Changed” was awarded the Oscar for Best Original Song.[2] At the time, Dylan was touring Australia. He and his band performed the song in a segment recorded in Sydney, that was inserted into the Academy Awards broadcast via a satellite link.[9]

In his awards speech, broadcast from Sydney, Dylan said: “I want to thank the members of the Academy who were bold enough to give me this award for this song, which obviously is a song that doesn’t pussyfoot around nor turn a blind eye to human nature.”[9]

Curtis Hanson, who directed Wonder Boys, also directed the music video for “Things Have Changed”. He intercut footage of Dylan with sequences from the feature film, to suggest that Dylan was appearing in the film. The video appears on the bonus DVD included in the Limited Edition version of Dylan’s 2006 album Modern Times.[10]

On February 2, 2014, an arrangement of “Things Have Changed” was used in a commercial for the Chrysler 200, aired during Super Bowl XLVIII.[11] Dylan narrated and starred in the commercial, saying “When it’s made here, it’s made with the one thing you can’t import from anywhere else — American pride… So let Germany brew your beer, let Switzerland make your watch, let Asia assemble your phone. We will build your car.”[12]