[Verse 4: Bob Dylan]
So long, honey babe
Where I’m bound, I can’t tell
Goodbye’s too good a word, babe
So I’ll just say fare thee well
I ain’t a-saying you treated me unkind
You could of done better but I don’t mind
You just kind of wasted my precious time
But don’t think twice, it’s all right 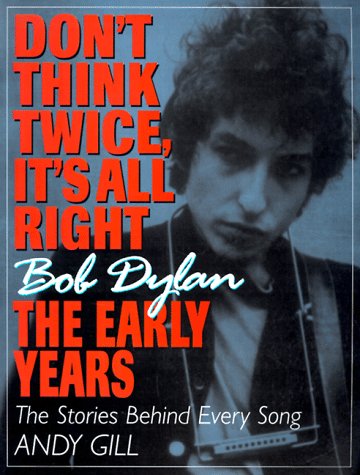 “Don’t Think Twice, It’s All Right” is a song written by Bob Dylan in 1962, recorded on November 14 that year, and released on the 1963 album The Freewheelin’ Bob Dylan and as a single.

In the liner notes to the original release, Nat Hentoff calls the song “a statement that maybe you can say to make yourself feel better … as if you were talking to yourself.” It was written around the time that Suze Rotolo indefinitely prolonged her stay in Italy. The melody is based on the public domain traditional song “Who’s Gonna Buy Your Chickens When I’m Gone”[1][2] and was taught to Dylan by folksinger Paul Clayton, who had used it in his song “Who’s Gonna Buy You Ribbons When I’m Gone?”

It has been argued that the guitar on the original version of the song, which features a fast fingerstyle, was played by Bruce Langhorne.[3] In live performances, Dylan often strummed the chords, or flatpicked, but in a similar, fast-paced manner. Moreover, the 1963 “Witmark demos” version of the song has Bob Dylan finger-picking, in a very similar manner to the original 1962 recording. Furthermore, a recording of an April 1963 concert in New York City[4] contains a live version of “Don’t Think Twice”, finger-picked in a manner similar to that heard on the original recording.

The song was used on the television series Mad Men, Friday Night Lights, and Men of a Certain Age.[5][6] It was also used in Nancy Savoca‘s 1991 film Dogfight, starring River Phoenix and Lili Taylor; the 2011 film The Help; and the October 30, 2016 episode of the TV series The Walking Dead.

Eric Clapton performed, to critical acclaim, a blues rendition of the song at the 1992 30th Anniversary Concert Celebrationin Dylan’s honor.[8]

The Four Seasons released a cover of the song as a single in 1965 (with the title “Don’t Think Twice”) under the pseudonym The Wonder Who? Their “joke” version reached the #12 position on the Billboard Hot 100 chart,[9] and eventually sold one million copies.