[Verse 1]
Mama, take this badge off of me
I can’t use it anymore
It’s getting dark, too dark to see
I feel I’m knocking on heaven’s door

[Verse 2]
Mama, put my guns in the ground
I can’t shoot them anymore
That long black cloud is coming down
I feel I’m knocking on heaven’s door

“Knockin’ on Heaven’s Door” is a song written and sung by Bob Dylan, for the soundtrack of the 1973 film Pat Garrett and Billy the Kid. Released as a single, it reached No. 12 on the Billboard Hot 100 singles chart. Described by Dylan biographer Clinton Heylin as “an exercise in splendid simplicity”,[1] the song, in terms of the number of other artists who have covered it, is one of Dylan’s most popular post-1960s compositions.

Members of the Western Writers of America chose it as one of the Top 100 Western songs of all time.[2] 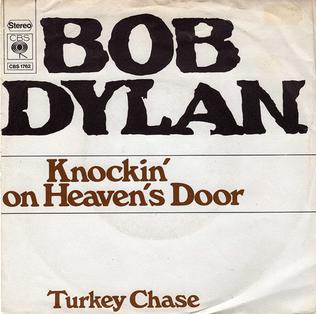 In January 1975 Eric Clapton played on Jamaican singer Arthur Louis‘ recording of “Knockin’ on Heaven’s Door” arranged in a reggae style. Subsequently, Clapton recorded his own reggae-style version of the song which was released in August 1975, two weeks after Louis’s version was released as a single in July 1975.[13]Clapton’s single peaked at No. 38 in the UK Singles Chart. The single was less successful in the US, only reaching No. 109 in Cash Box. Clapton’s 1996 boxed set Crossroads 2: Live in the Seventies features a performance recorded in London in April 1977. The song was also performed during the Journeyman and One More Car, One More Rider world tours in 1990 and 2003. Additionally, the song has been included on several Clapton compilation albums, such as Time Pieces: The Best of Eric Clapton, Backtrackin’, The Cream of Clapton and Complete Clapton.[14]

In 1987, Guns N’ Roses started including the song in their live sets. A live version of the song was released on the maxi-single of “Welcome to the Jungle” the same year. They recorded a studio version in 1990 for the soundtrack of the film Days of Thunder which reached No. 18 on the Billboard Album Rock Tracks chart in 1990. This version was later slightly modified for the 1991 album Use Your Illusion II (basically discarding the responses in the second verse). Released as the fourth single from the album, it reached No. 2 on the UK Singles Chart as well as No. 12 in Australia and No. 1 in Ireland. Their performance of the song at the Freddie Mercury Tribute Concert in 1992 was used as the B-side for the single release and was also included on their Live Era: ’87–’93 album, released in 1999.[15] The music video for this version of the song was directed by Andy Morahan.[16]

In 1996 and with the consent of Dylan, Scottish musician Ted Christopher wrote a new verse for “Knockin’ on Heaven’s Door” in memory of the schoolchildren and teacher killed in the Dunblane school massacre. This has been, according to some sources, one of the few times Dylan has officially authorized anybody to add or change the lyrics to one of his songs.[34][35] This version of the song, including children from the village singing the chorus with guitarist and producer of Dylan’s album Infidels (1983), Mark Knopfler, was released on December 9 in the UK and reached No. 1 in the UK Singles Chart.[36] The proceeds went to charities for children.[37]The song was featured on the compilation album Hits 97, where all royalties from the song were given to three separate charities.

Nick Talevski used the title for his book, Knocking On Heaven’s Door: Rock Obituaries.[45] A version of this song was performed by Raign for the TV show “The 100”

An alternate name for the 24th episode of Neon Genesis Evangelion is “Knockin’ on Heaven’s Door”.

The title is used as a name of a Stand, “Heaven’s Door”, in the fourth part of the manga “Jojo’s Bizarre Adventure“, Diamond is Unbreakable.

The title was used for the 12th episode of Angel Beats! and Bob Dylan along with the song was mentioned in the episode by T.K. and Hinata

Covered by The Jenerators, the song was used during a tribute to the death of cast member Miguel Ferrer of NCIS: Los Angeles at the end of the Season 8 Episode 16 “New Tricks”, broadcast on March 5, 2017. Ferrer was a member of The Jenerators.[46]