[Verse 1]
Oh, well, I love ya pretty baby
You’re the only love I’ve ever known
Just as long as you stay with me
The whole world is my throne

[Refrain]
Beyond here lies nothin
Nothin we can call our own

[Verse 2]
Well, I’m moving after midnight
Down boulevards of broken cars
Don’t know what I’d do without it
Without this love that we call ours

[Refrain]
Beyond here lies nothin
Nothin but the moon and stars

[Verse 3]
Down every street there’s a window
And every window made of glass
We’ll keep on loving, pretty baby
For as long as love will last

[Refrain]
Beyond here lies nothin
But the mountains of the past

[Verse 4]
Well, my ship is in the harbor
And the sails are spread
Listen to me, pretty baby
Lay your hand upon my head 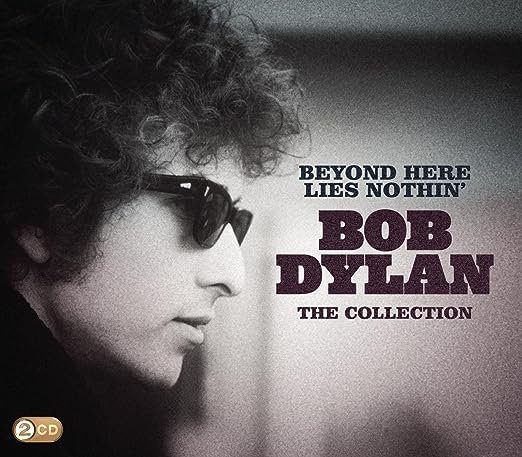 “Beyond Here Lies Nothin’” is the opening track of Bob Dylan‘s 2009 studio album, Together Through Life. The title is a quote from the Ancient Roman poet Ovid.[1][2] The track was available as a free download on Dylan’s official website from March 30 to March 31, 2009, and a photo montage set to the song premiered on Amazon on April 21.

Like much of Dylan’s more recent work, the song was produced by himself using the pseudonym, Jack Frost.

This song was used on the trailer for the second season of HBO‘s True Blood and was also featured in the final episode of the second season of the program.[1] That episode was titled “Beyond Here Lies Nothin’“. Blue-Tongue Films created a music video for the song directed by Nash Edgerton and featuring Joel Stoffer & Amanda Aardsma in an extreme marital spat.

The song was nominated at the 52nd Grammy Awards for Grammy Award for Best Rock Vocal Performance, Solo.