[Intro]
Once upon a time
Not so long ago

Tommy’s got his six string in hock
Now he’s holding in
When he used to make it talk
So tough, ooh it’s tough
Gina dreams of running away
When she cries in the night
Tommy whispers “Baby it’s okay
Someday”

Ooh we’ve got to hold on, ready or not
You live for the fight when it’s all that you’ve got 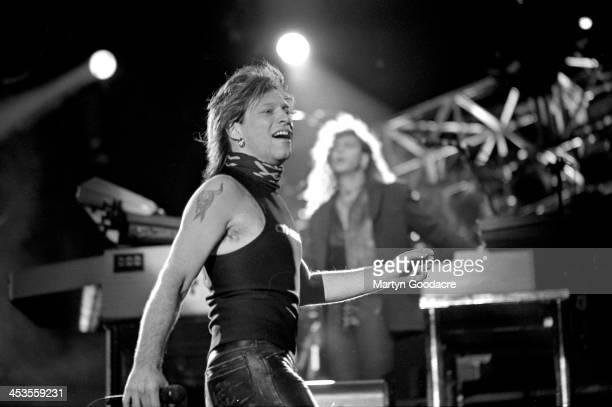 “Livin’ on a Prayer” is Bon Jovi‘s second chart-topping song from their album Slippery When Wet. Written by Jon Bon Jovi, Richie Sambora, and Desmond Child, the single, released in late 1986, was well received at both rock and pop radio and its music video was given heavy rotation at MTV, giving the band their first No. 1 on the Billboard Mainstream Rock chart and their second consecutive No. 1 Billboard Hot 100 hit.[1]

The song is the band’s signature song, topping fan-voted lists and re-charting around the world decades after its release. The original 45-RPM single release sold 800,000 copies in the United States,[citation needed] and in 2013 was certified Triple Platinum for over 3 million digital downloads. The official music video has over 410 million views on YouTube. 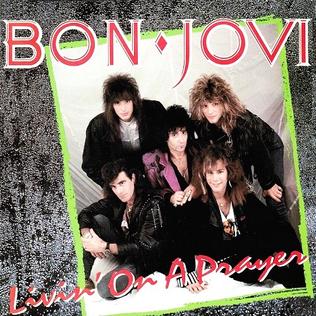 Jon Bon Jovi did not like the original recording of this song, which can be found as a hidden track on 100,000,000 Bon Jovi Fans Can’t Be Wrong. Lead guitarist Richie Sambora, however, convinced him the song was good, and they reworked it with a new bass guitar line (recorded by Hugh McDonald uncredited [2][3][4]), different drum fills and the use of a talk box to include it on their upcoming album Slippery When Wet. The song spent two weeks at number one on the Mainstream Rock Tracks, from January 31 to February 14, 1987, and four weeks at number one on the Billboard Hot 100, from February 14 to March 14. It also hit number four on the UK singles chart.

The album version of the song, timed around 4:10, fades out at the end. However, the music video game Guitar Hero World Tour features the song’s original studio ending, where the band revisit the intro riff and end with a talk box solo; this version ends at 4:53. The original ending is also playable on the similar video game Rock Band 2, though edited in this case (thereby eliminating the talk box solo at the end). The version included on the 2005 DualDisc edition of Slippery When Wet has an extended version of the original ending, with a different talk box solo playing over the riff (possibly taken from an outtake of the song); this version, which fades out at the end like the standard version of the song, ends at 5:06.

After the September 11, 2001 attacks – in which New Jersey was the second-hardest hit state after New York City, suffering hundreds of casualties among both WTC workers and first responders – the band performed an acoustic version of this song for New York. Bon Jovi performed a similar version as part of the special America: A Tribute to Heroes.

In 2006, online voters rated “Livin’ on a Prayer” No. 1 on VH1‘s list of The 100 Greatest Songs of the ’80s. More recently, in New Zealand, “Livin’ on a Prayer” was No. 1 on the C4 music channel’s show U Choose 40, on the 80’s Icons list. It was also No. 1 on the “Sing-a-long Classics List”. After Bon Jovi performed in New Zealand on January 28, 2008 while on their Lost Highway Tour, the song re-entered the official New Zealand RIANZ singles chart at number 24, over twenty years after the initial release.[5]

Australian music TV channel MAX placed this song at No. 18 on their 2008 countdown “Rock Songs: Top 100”. In 2009, the song returned to the charts in the UK, notably hitting the number-one spot on the UK Rock Chart.

In 2010 the song was chosen in an online vote on the Grammy.com website over the group’s more recent hits “Always” and “It’s My Life” to be played live by the band on the 52nd Grammy Awards telecast.[6][7]

The song, including its original ending, is also playable on the music video games Guitar Hero World Tour and Rock Band 2. The song was re-worked and made available to download on November 9, 2010 for use in the Rock Band 3 music gaming platform to take advantage of PRO mode which allows use of a real guitar / bass guitar, and standard MIDI-compatible electronic drum kits / keyboards in addition to up to three-part harmony or backup vocals.[10][11]

In 2017, ShortList’s Dave Fawbert listed the song as containing “one of the greatest key changes in music history”. [12]

“It deals with the way that two kids – Tommy and Gina – face life’s struggles,” noted Jon Bon Jovi, “and how their love and ambitions get them through the hard times. It’s working class and it’s real… I wanted to incorporate the movie element, and tell a story about people I knew. So instead of doing what I did on ‘Runaway‘, where the girl didn’t have a name, I gave them names, which gave them an identity… Tommy and Gina aren’t two specific people; they represent a lifestyle.”[13]

Bon Jovi explained that he “wrote that song during the Reagan era (1980–1988) and the trickle-down economics are really inspirational to writing songs”.[14] Tommy and Gina are also referred to in Bon Jovi’s 2000 single “It’s My Life“.

The music video was filmed on September 17, 1986, at the Grand Olympic Auditorium in Los Angeles, California and was directed by Wayne Isham.[15] It all starts with a silhouette of the band walking down the hall and it features shots of the band rehearsing, then playing in front of a crowd. The first half of the video, featuring the rehearsal footage, is in black and white, and the second half of the video, performing to the arena audience, is in color.

In the beginning of the video, Jon Bon Jovi has a harness attached by professional stunt coordinators and stunt spotters, and later in the music video he soars over the crowd via overhead wires.

Bon Jovi have themselves reworked the song several times, including an acoustic live version that served as a precursor to the MTV Unplugged series and a re-recorded version of the song, “Prayer ’94,” which appeared on U.S. versions of their Cross Road hits collection.