[Verse 1: David Bowie & Freddie Mercury]
Pressure pushing down on me
Pressing down on you, no man ask for
Under pressure that burns a building down
Splits a family in two
Puts people on streets

[Chorus: David Bowie & Freddie Mercury]
It’s the terror of knowing what the world is about
Watching some good friends screaming
‘Let me out’
Pray tomorrow gets me higher
Pressure on people, people on streets

[Chorus: David Bowie & Freddie Mercury]
It’s the terror of knowing what the world is about
Watching some good friends screaming
‘Let me out’
Pray tomorrow gets me higher, high
Pressure on people, people on streets

[Bridge: David Bowie & Freddie Mercury]
Turned away from it all like a blind man
Sat on a fence but it don’t work
Keep coming up with love but it’s so slashed and torn
Why – why – why?
Love, love, love, love, love
Insanity laughs under pressure we’re breaking

“Under Pressure” is a 1981 song by the British rock band Queen. The song was written and recorded in collaboration with the singer David Bowie. It was included on Queen’s 1982 album Hot Space. The song reached number one on the UK Singles Chart, becoming the band’s second number-one hit in their home country (after 1975’s “Bohemian Rhapsody“, which topped the chart for nine weeks). The song only peaked at No. 29 on the US Billboard Hot 100, and would re-chart for one week at No. 45 in the US following Bowie’s death in January 2016. It was also number 31 on VH1‘s 100 Greatest Songs of the ’80s.[1]It has been voted the 2nd best collaboration of all time in a poll by the Rolling Stone magazine.[2]It has since sold over 3.4 million copies worldwide.[3] The song was played live at every Queen concert from 1981 until the end of Queen’s touring career in 1986.[4][5][6] It is recorded on the live albums Queen Rock Montreal and Live at Wembley ’86.[7][8] The song was included on some editions of Queen’s first Greatest Hits compilations, such as the original 1981 Elektra release in the US. It is included on the band’s compilation albums Greatest Hits II, Classic Queen, and Absolute Greatest[9] as well as Bowie compilations such as Best of Bowie (2002),[10] The Platinum Collection (2005), Nothing Has Changed (2014) and Legacy (2016).

Queen had been working on a song called “Feel Like”, but was not satisfied with the result.[11][12] David Bowie had originally come to Mountain Studios to sing back up vocals on another Queen song, “Cool Cat”, but his vocals were removed from the final song because he was not satisfied with his performance. Once he got there, they worked together for a while and wrote the song.[13] The final version, which became “Under Pressure”, evolved from a jam session that Bowie had with the band at Queen’s studio in Montreux, Switzerland. It was credited as being co-written by the five musicians. The scat singing that dominates much of the song is evidence of the jam-beginnings as improvisation. However, according to Queen bassist John Deacon (as quoted in a French magazine in 1984)[14], the song’s primary musical songwriter was Freddie Mercury – though all contributed to the arrangement. Brian May recalled to Mojo magazine, in October 2008, that, “It was hard, because you had four very precocious boys and David, who was precocious enough for all of us. David took over the song lyrically. Looking back, it’s a great song but it should have been mixed differently. Freddie and David had a fierce battle over that. It’s a significant song because of David and its lyrical content.”[15] The earlier, embryonic version of the song without Bowie, “Feel Like”, is widely available in bootleg form, and was written by Queen drummer Roger Taylor.

There has also been some confusion about who had created the song’s bassline. John Deacon said (in Japanese magazine Music life in 1982) that David Bowie created it. In more recent interviews, Brian May and Roger Taylor credited the bass riff to Deacon. Bowie, on his website, said that the bassline was already written before he became involved.[16] Roger Taylor, in an interview for the BBC documentary Queen: the Days of Our Lives, stated that Deacon did indeed create the bassline, stating that all through the sessions in the studio he had been playing the riff over and over. He also claims that when the band returned from dinner, Deacon, amusingly, forgot the riff, but fortunately Taylor was still able to remember it.[17] Brian May clarified matters in a 2016 Mirror Online article, writing that it was actually Bowie, not Taylor, who had inadvertently changed the riff. The riff began as “Deacy began playing, 6 notes the same, then one note a fourth down”. After the dinner break, Bowie corrected (actually changed) Deacon’s memory of the riff to “Ding-Ding-Ding Diddle Ing-Ding”.[18]

The video for the song features neither Queen nor David Bowie due to touring commitments.[19] Taking the theme of pressure, director David Mallet edited together stock footage of traffic jams, commuter trains packed with passengers, explosions, riots, cars being crushed and various pieces of footage from silent films of the 1920s, most notably Sergei Eisenstein‘s influential Soviet film Battleship Potemkin, the silent Dr. Jekyll and Mr. Hyde starring John Barrymore, and F.W. Murnau‘s Nosferatu, a masterpiece of the German Expressionist movement.[19][20] The video explores the pressure-cooker mentality of a culture willing to wage war against political machines, and at the same time love and have fun (there is also footage of crowds enjoying concerts, and lots of black and white kissing scenes).[20] Top of the Pops refused to show the video due to it containing footage of explosions in Northern Ireland, so a choreographed performance was instead shown.[21][22] In 2003, Slant Magazine ranked Under Pressure number 27 among the 100 greatest music videos of all time.[23]

The September 2005 edition of online music magazine Stylus singled out the bassline as the best in popular music history.[24] In November 2004, Stylus music critic Anthony Miccio commented that “Under Pressure” “is the best song of all time” and described it as Queen’s “opus“.[25] In 2012, Slant Magazine listed “Under Pressure” as the 21st best single of the 1980s.[26]

Although very much a joint project, only Queen incorporated the song into their live shows at the time. Bowie chose not to perform the song before an audience until the 1992 Freddie Mercury Tribute Concert, when he and Annie Lennox sang it as a duet (backed by the surviving Queen members).[27] However, after Mercury’s death and the Outside tour in 1995, Bowie performed the song at virtually every one of his live shows, with bassist Gail Ann Dorsey taking Mercury’s vocal part. The song also appeared in set lists from A Reality Tour mounted by Bowie in 2004, when he frequently would dedicate it to Freddie Mercury. Queen + Paul Rodgers have recently performed the song; and in summer of 2012, Queen + Adam Lambert toured, including a performance of the song by Lambert and Roger Taylor in each show.[28] While David Bowie was never present for a live performance of the song with Freddie Mercury, Roger Taylor instead filled for backing vocals usually in unison with Mercury, as Mercury took over all of Bowie’s parts. 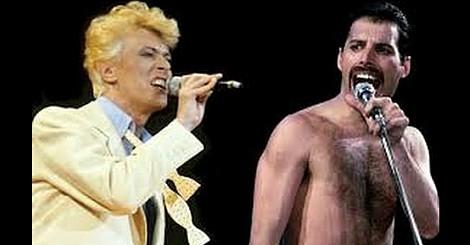 Remixes and other releases

A remixed version (called the “Rah Mix”) was issued in December 1999 to promote Queen’s Greatest Hits III compilation, reaching No. 14 on the UK Singles Chart. The video for the Rah Mix was directed by DoRo and features footage of Freddie Mercury from the Wembley concert on 12 July 1986 and David Bowie at the Freddie Mercury Tribute Concert also at Wembley on 20 April 1992 spliced together using digital technology (and with Annie Lennox carefully edited out) and features on the Greatest Flix III compilation, the Rah Mix CD single (as an Enhanced CD video) and the 2011 iTunes LP edition of Hot Space.

Mouth Pressure. Released in January 2017 as a part of the Neil Cicierega album Mouth Moods, “Mouth Pressure” pairs the instrumentals from “Under Pressure” with the vocals from Smash Mouth‘s “All Star“.[35][36]

My Chemical Romance and the Used version

The song was covered in 2005 by American alternative rock bands the Used and My Chemical Romance for tsunami relief. The cover was originally released as an Internet download track but has subsequently been featured as a bonus track on the 2005 re-release of the Used’s second studio album In Love and Death, and received wide airplay in 2005.

On the Billboard charts, the single reached number 28 on Modern Rock chart and number 41 on the Hot 100.[69]

Controversy arose when Vanilla Ice sampled the bassline for his 1990 single “Ice Ice Baby“. Initially he denied the accusation and then said he had modified it[70] but did not originally pay songwriting credit or royalties to Queen and Bowie.[71][72] A lawsuit resulted in Bowie and all members of Queen receiving songwriting credit for the sample. Vanilla Ice later claimed that he purchased the publishing rights to “Under Pressure”.[73][74] Vanilla Ice said buying the song made more financial sense than paying out royalties.[73]