Music video by Bon Jovi performing I’ll Be There For You. (C) 1988 The Island Def Jam Music Group

[Verse 1]
I guess this time you’re really leaving
I heard your suitcase say goodbye
Well as my broken heart lies bleeding
You say true love is suicide
You say you’ve cried a thousand rivers
And now you’re swimming for the shore
You left me drowning in my tears
And you won’t save me anymore
Now I’m praying to God you’ll give me one more chance, girl

[Verse 2]
I know you know we’ve had some good times
Now they have their own hiding place
Well I can promise you tomorrow
But I can’t buy back yesterday
And Baby you know my hands are dirty
But I wanted to be your valentine
I’ll be the water when you get thirsty, baby
When you get drunk, I’ll be the wine

“I’ll Be There for You” is a song by American rock band Bon Jovi from their 1988 album New Jersey. It was written by Jon Bon Jovi and Richie Sambora. The song ranked at number one on the Billboard Hot 100 and #5 on the Mainstream rock charts.[1] 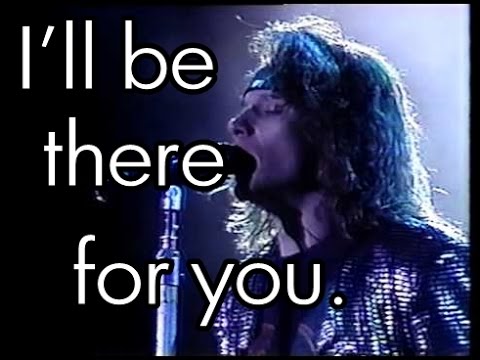 Originally released on the 1988 album New Jersey, it became the band’s third single from the album when it was released as a single in 1989. As the band (and hard rock music) was at its peak popularity at this time, the song quickly climbed to the number one position on the Billboard Hot 100, becoming their fourth and final number one single.[2] The song has remained as one of Bon Jovi’s signature songs and a classic in the power ballad genre. The song was also a peek into a more mature sound heard on their following albums Keep the Faith and These Days.

Some think the verses have an eerily and uncredited similarity (both musically and melodically) to John Lennon‘s Beatles‘ track “Don’t Let Me Down” (recorded during the Get Back sessions) and the chorus was claimed, by some fans of the late 1980s hard rock genre, to have been culled from an unreleased song by Joel Ellis of Cats in Boots and Heavy Bones.[3][4] Ellis has said that Lehua Reid (Richie Sambora’s ex-fiancée) regaled him with anecdotes regarding Jon Bon Jovi and Richie Sambora “sitting at the piano for hours with a box full of tapes they got from people and going through the songs looking for stuff they could rip off and laughing about it, your [Ellis’] song was played over and over and over.”[4]

On March 16, 2011, James Durbin performed the song on the 10th season of American Idol.

The video for the song features the band performing on a dark stage with an almost monochromatic blue color due to the stage lighting, with close-ups of each member, most notably lead singer Jon Bon Jovi and lead guitarist Richie Sambora. However, it is persistent throughout the clip that Richie Sambora’s face is constantly in shadow through the entire video. The video footage then switches midway to black-and-white footage from a Bon Jovi concert at the old Wembley Arena in London, England.

“Homebound Train,” the B-side to “I’ll Be There for You”, is notable for being one of the band’s heaviest songs, and also for the brief back-and-forth keyboard and harmonica solos leading up to the guitar solo. It is a heavy metal song opposed to its A-side that is a hard rock/glam metal power ballad. When played during The Circle Tour, it was sung by lead guitarist Richie Sambora.