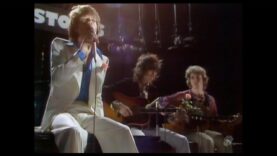 One of the two official promo videos for the Rolling Stones’ 1973 single “Angie”. It reached number 5 in the UK singles chart, and number 1 in the US Billboard chart.

The track features on the 1973 album Goats Head Soup, and was composed by Mick Jagger and Keith Richards, and was produced by Jimmy Miller.