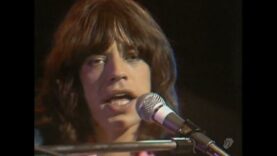 The official promo video for the Rolling Stones’ 1976 single “Fool To Cry, which reached number 6 in the UK singles chart.

The track features on the 1976 album Black And Blue, and was composed by Mick Jagger and Keith Richards.

The video was directed by Brian Gowers, who has worked on more than 350 promo videos for acts such as Queen, Michael Jackson, Prince and Rod Stewart.