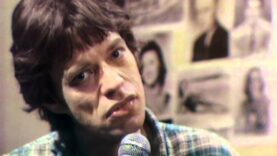 The official promo video for the Rolling Stones’ 1978 single “Far Away Eyes”. The song reached number one on the US Billboard chart and number 3 in the UK.

The track features on the 1978 album Some Girls, and was composed by Mick Jagger and Keith Richards, and produced by the Glimmer Twins.

The video was directed by filmmaker Michael Lindsay-Hogg, who directed several promo videos for the band, including “Start Me Up”, “Jumping Jack Flash” and “Fool To Cry”. Lindsay-Hogg also directed promos for the Beatles and the Who.

I was drivin’ home early Sunday morning
Through Bakersfield,
Listening to gospel music on the coloured radio station,
And the preacher said: “You know you always have the lord by your side”
And I was so pleased to be informed of this
That I ran twenty red lights in his honour,
Thank you Jesus, thank you lord

I had an arrangement to met a girl, and I was kind of late
And I thought by the time I got there she’d be off,
She’d be off with the nearest truck driver she could find
Much to my surprise there she was sittin’ in a corner
Little bleary, worse for wear and tear
Was a girl with far away eyes
Well I tell you

The Rolling Stones – Hand of Fate