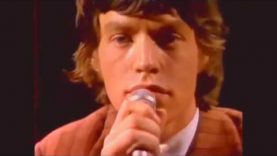 This was one of the first songs written by Mick Jagger and Keith Richards.
– The Stones manager, Andrew Oldham, gave it to a singer he also managed named Marianne Faithfull, who released it in 1964. It was going to be the B-side of her first single, but the record company decided to make it the A-side and it became her first hit.
The Stones recorded it a year later. Faithfull became Mick Jagger’s girlfriend in 1966.
Their tumultuous relationship ended 3 years later. In that time, she helped write the song “SISTER MORPHINE” and gave Jagger the book from Beaudelaire, witch that inspired “Sympathy For The Devil” in 1967..
– In a 1992, Keith Richards said: “suddenly, ‘Oh, we’re songwriters,’ with the most totally anti-Stones sort of song you could think of at the time, while we’re trying to make a good version of ‘Still A Fool’ from Muddy Watters, When you start writing, it doesn’t matter where the first one comes from. You’ve got to start somewhere, right?
…So Andrew locked Mick and myself into a kitchen in this horrible little apartment we had in E.Groove, and said, ‘You ain’t comin’ out,’ and there was no way out. We were in the kitchen with some food and a couple of guitars, but we couldn’t get to the John, so we had to come out with a song. In his own little way, that’s where Andrew made his great contribution to the Stones. That was such a flatulent idea, a fart of an idea, that suddenly you’re gonna lock two guys in a room, and they’re going to become songwriters. Forget about it. And it worked. In that little kitchen Mick and I got hung up about writing songs, and it still took us another six months before we had another hit with Gene Pitney, ‘That Girl Belongs To Yesterday.’ We were writing these terrible Pop songs that were becoming Top-10 hits. I thought, ‘What are we doing here playing the fucking blues, and writing these horrible Pop/ballad songs and getting very successful?’ They had nothing to do with us, except we wrote ’em. And it took us a while to come up with ‘The Last Time.’ That was the first one we came up with where Mick and I said, ‘This is one we can lay on the guys.’ At the time we were already borrowing songs from the Beatles – ‘I Wanna Be Your Man’ – because we were really hard up for singles. So they gave us a hand. In retrospect, during the ’60s the Stones and the Beatles were almost the same band, because we were the only ones in that position.” (thanks, Bertrand – Paris, France)
The original title was “As Time Goes By.” It was changed to avoid confusion with the song from Casablanca.
Mick Jagger (1995): “I wrote the lyrics, and Keith wrote the melody. It’s a very melancholy song for a 21-year-old to write: The evening of the day, watching children play – it’s very dumb and naive, but it’s got a very sad sort of thing about it, almost like an older person might write. You know, it’s like a metaphor for being old: You’re watching children playing and realizing you’re not a child. It’s a relatively mature song considering the rest of the output at the time. And we didn’t think of doing it, because the Rolling Stones were a butch Blues group. But Marianne Faithfull’s version was already a big, proven hit song… It was one of the first things I ever wrote.”
– When Mick and Keith wrote this, The Stones were still playing mostly Blues covers at their shows. This did not fit their raucous image, but it established The Stones as a band that could pull off the occasional ballad.
– Jagger sang and Keith Richards played acoustic guitar over a string arrangement, and no other Stones members performed on that song…and the Glimmer Twins are born!
– The strings were arranged by Mike Leander, who did The Beatles “She’s Leaving Home.”
– This was released as a single in the US because ballads were popular there at the time. The release in England was delayed 6 months because they did not want to compete with “Yesterday” by The Beatles, when they finally did release it there, it was as the B-side of “19th Nervous Breakdown.”
– Mick says in 2001: – “I sang about children then. I wrote that song when I was 20. It was reflective – though they weren’t my children at that point.”
– This was one of 3 songs The Stones performed on their 1966 Ed Sullivan Show appearance, which was the first time The Stones appeared in color on a US broadcast.
– ANd In 2006, in Milan, the Rolling Stones played this live as “Con Le Mie Lacrime.”