[Bridge]
Where does the answer lie?
Living from day to day
If it’s something we can’t buy
There must be another way

“Spirits in the Material World” is a song by rock trio The Police, written by Sting. It is the opening track for their 1981 album Ghost in the Machine. The song features bass, guitar, synthesizer, drums, saxophone, and vocals. It has a Jamaican Ska beat which changes to a swaggering rock beat in the chorus. It was released as a single in 1981 and reached No. 12 in the United Kingdom[1] and No. 11 in the US in early 1982.[2] 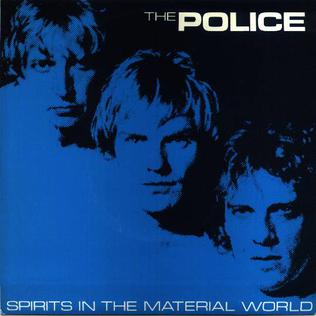 “Spirits in the Material World” was written by Sting on a Casio keyboard while in a truck.[3] It was his first experience using a synthesizer.[3]

‘Spirits in the Material World’ was written on one of those Casio keyboards while I was riding in the back of a truck somewhere. I just tap, tap, tap and there it was, just by accident. That was the first time I’d ever touched a synthesizer, that album.

Andy Summers’ presence on the studio track is considerably less pronounced than on the vast majority of Police songs, and in fact, Sting wanted to record it without him entirely. Having written the song on a synthesizer, he wanted for it to use synthesizer instead of guitar, and to play the synthesizer part himself. Summers thought the synthesizer part should be replaced by guitar, and after considerable argument, they compromised by recording the part on both instruments, with a mix such that the synthesizer drowned out much of Summers’s guitar.[4] In live performances this part was played on guitar only, with synthesizer used only for background chords.The track was recorded at Air Studios Montserrat.

The lyrics comment on the nature of man’s existence and the failure of his earthly institutions.

“Spirits in the Material World” eventually saw single release in 1981 as the follow-up to “Every Little Thing She Does Is Magic,” making it the third single from Ghost in the Machine in Britain and the second in America. The single, while not as successful as its predecessors, peaked at No. 12 in Britain and No. 11 in America. It was followed up by “Secret Journey” in America.

The UK B-side of “Spirits in the Material World,” “Low Life,” was written by Sting around 1977 in the back of a German tour bus.[3] Although the band’s drummer Stewart Copeland claimed to have “always loved the song,” guitarist Andy Summers claimed that “Neither Stewart or I liked ‘Low Life.’ I thought the lyric was snobby and it had a kind of corny jazziness to it.”[3] The American B-Side, an instrumental song titled “Flexible Strategies”, was recorded in Canada while the band jammed for ten minutes while working on Ghost in the Machine, when word came for them to create a B-Side. According to Stewart Copeland, recording this particular song was a disgrace.[5] [6]

Since the break-up of the Police, Sting has often performed the song on solo tours.

In all live performances, the song is played in a different key from the studio version. In most live versions of the song, Sting starts playing the original bassline, then switches to a more simplified one to play while singing.[7]