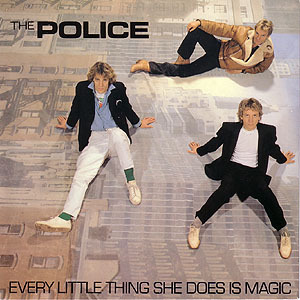 “Every Little Thing She Does Is Magic” is a song by British rock group The Police from their fourth album Ghost in the Machine. The song, notable for featuring a pianist (uncommon in Police songs), dates back to a demo recorded in the house of Mike Howlett in the fall of 1976. It was also a hit single that reached the top of the charts in the United Kingdom (topping its predecessor, “Invisible Sun“) in November 1981[1] and hit number three on the US Billboard Hot 100 chart that same year.[2]

Although recorded in 1981, Sting wrote the song as early as 1976.[3] An early (1976) demo of the song can be heard on the Strontium 90 album Strontium 90: Police Academy. A good ear will detect that the vocals are set back from the music on this track. This was either due to the mastering feel, or the overdub from the demo.

This was first recorded as a demo, with the piano figure, in a studio in Montreal. I had written the song long before the Police were successful, but it seemed a bit soft for the band at first. But the demo was really great. It sounded like a No 1 song to me. I took it to the band, who were reticent, still thinking it was soft. I was saying, “But listen, it’s a hit.” We tried to do it from scratch as the Police, but it didn’t have the same energy as the demo. After a degree of hair-pulling and torturing on my part, I got the band to play over the top of my demo.

The piano part was added by session keyboardist Jean Roussel, whom Sting invited to play on the track against the wishes of his bandmates Andy Summers and Stewart Copeland.[5] Summers did not approve of Roussel’s inclusion in the track, claiming that he was “incredibly pushy” and that “there wasn’t room for him. He must have played 12 piano parts on that song alone.”[6] Copeland, however, said that Roussel “wasn’t pushy … He was just like us actually.”[6]

Feeling that the arrangement of the track was not enough like The Police style, Summers (who recalled, “as the guitar player I was saying, ‘What the fuck is this? This is not the Police sound'”) and Copeland attempted to change the track.[6] However, as Copeland remembers:

“I remember saying, ‘Okay put up Sting’s original demo and I’ll show you how crummy it is.’ So Sting stood over me and waved me through all the changes. I did just one take, and that became the record. Then Andy did the same thing on the guitar. We just faced the music, bit the bullet, and used Sting’s arrangements and demo. Damn.”[6]

In the chorus, Sting, not knowing any other word which would rhyme with “magic,” used the word “tragic.” Copeland said of this moment, “I remember Sting for years trying to think of a rhyme for ‘magic’, as in ‘Every Little Things She Does Is Magic.’ I think the only word he could come up with, apart from ‘tragic’, was ‘pelagic’, which means ‘ocean going’. There I was in my leather pants and punk hairdo, pondering the distinction between ocean-going and river-going fish.”[6]

“Every Little Thing She Does Is Magic” was released as the second single from Ghost in the Machine in UK and Ireland, while in most other parts of the world it was the debut single from the album. The song outperformed its predecessor in Britain, where it topped the charts. The song also hit No. 1 in Canada, Ireland and the Netherlands, No. 2 in Australia, and No. 5 in Norway. It reached No. 3 in America, making it and “King of Pain” the band’s second-best-performing single there, after its No. 1 hit “Every Breath You Take“.

The lyrics of the second verse, “Do I have to tell the story / Of a thousand rainy days since we first met? / It’s a big enough umbrella / But it’s always me that ends up getting wet,” were reprised by Sting at the end of the song “O My God” issued on the band’s next album. These lyrics were repeated once more in “Seven Days” on Sting’s solo album Ten Summoner’s Tales. He later re-recorded the song in an orchestral version for his album Symphonicities.

The song has received a highly positive retrospective review from Allmusic journalist Chris True, who praised the lyrics and described the song as “pop brilliance”.[7]

The song’s B-side, “Flexible Strategies,” was reportedly an improvised jam that was created in response to the record company’s demand for a B-side. Stewart Copeland claims, “Word came down from the marketing machine ‘Create a b-side – today! We walked over to the gear, strapped on, and played for ten minutes. A disgrace.”[4][8]

Use in other media