[Verse 1]
We’d like to know a little bit about you for our files
We’d like to help you learn to help yourself
Look around you, all you see are sympathetic eyes
Stroll around the grounds until you feel at home

[Verse 2]
Hide it in a hiding place where no one ever goes
Put it in your pantry with your cupcakes
It’s a little secret, just the Robinsons’ affair
Most of all, you’ve got to hide it from the kids

[Verse 3]
Sitting on a sofa on a Sunday afternoon
Going to the candidates debate
Laugh about it, shout about it
When you’ve got to choose
Every way you look at it, you lose

[Hook]
Where have you gone, Joe DiMaggio
A nation turns its lonely eyes to you
Woo, woo, woo
What’s that you say, Mrs. Robinson
Joltin’ Joe has left and gone away
Hey, hey, hey
Hey, hey, hey

“Mrs. Robinson” is a song by American music duo Simon & Garfunkel from their fourth studio album, Bookends (1968). Produced by the duo and Roy Halee, it is famous for its inclusion in the 1967 film The Graduate. The song was written by Paul Simon, who pitched it to director Mike Nichols alongside Art Garfunkel after Nichols rejected two other songs intended for the film. The song contains a famous reference to baseball star Joe DiMaggio.

“Mrs. Robinson” became the duo’s second chart-topper, hitting number one on the Billboard Hot 100, and peaking within the top 10 of multiple other countries, including the United Kingdom, Ireland, and Spain, among others. In 1969, it became the first rock song to win the Grammy Award for Record of the Year. The song has been covered by a number of artists, including Frank Sinatra, the Lemonheads, and Bon Jovi. In 2004, it finished at No. 6 on AFI’s 100 Years…100 Songs survey of top tunes in American cinema. 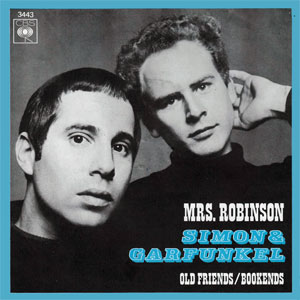 Simon & Garfunkel reached national fame in the United States in 1965–66, touring colleges and releasing a string of hit singles and albums. Meanwhile, director Mike Nichols, then filming The Graduate, became fascinated with the duo’s past two efforts, listening to them nonstop before and after filming.[2][3] After two weeks of this obsession, he met with Columbia Records chairman Clive Davis to ask for permission to license Simon & Garfunkel music for his film. Davis viewed it as a perfect fit and envisioned a best-selling soundtrack album.[4] Simon was not as immediately receptive, viewing movies as akin to “selling out“, but he agreed to write at least one or two new songs for the film after being impressed by Nichols’ wit and the script.[4] Leonard Hirshan, a powerful agent at William Morris, negotiated a deal that paid Simon $25,000 to submit three songs to Nichols and producer Lawrence Turman.[5]

Several weeks later, Simon re-emerged with two new tracks, “Punky’s Dilemma” and “Overs“, neither of which Nichols was particularly taken with.[5] Nichols asked if the duo had any more songs to offer, and after a break from the meeting, they returned with an early version of “Mrs. Robinson”. They had been working on a track titled “Mrs. Roosevelt“, and returned to perform it for Nichols. He was ecstatic about the song, later commenting, “They filled in with dee de dee dee de dee dee dee because there was no verse yet, but I liked even that.”[5] Garfunkel later expanded upon the song’s placement in The Graduate:

Paul had been working on what is now ‘Mrs. Robinson’, but there was no name in it and we’d just fill in with any three-syllable name. And because of the character in the picture we just began using the name ‘Mrs. Robinson’ to fit […] and one day we were sitting around with Mike talking about ideas for another song. And I said ‘What about Mrs. Robinson.’ Mike shot to his feet. ‘You have a song called “Mrs. Robinson” and you haven’t even shown it to me?’ So we explained the working title and sang it for him. And then Mike froze it for the picture as ‘Mrs. Robinson’.[6]

The final version of “Mrs. Robinson” was completed on February 2, 1968, at Columbia Studio A in New York City.[1] The recording was released more than three months after the release of The Graduate, but through its numerous radio plays became an important cross-promotion of the film during its initial run in theaters.

Simon’s inclusion of the phrase “coo-coo-ca-choo” is a homage to the Beatles‘ “I Am the Walrus“.[7]

References in the last verse to Joe DiMaggio are perhaps the most discussed. Simon, a fan of Mickey Mantle, was asked during an intermission on The Dick Cavett Show why Mantle was not mentioned in the song instead of DiMaggio. Simon replied, “It’s about syllables, Dick. It’s about how many beats there are.”[8] Simon met DiMaggio accidentally in a New York City restaurant, and the two immediately discussed the song. DiMaggio said “What I don’t understand, is why you ask where I’ve gone. I just did a Mr. Coffee commercial, I’m a spokesman for the Bowery Savings Bank and I haven’t gone anywhere!” Simon replied “that I didn’t mean the lines literally, that I thought of him as an American hero and that genuine heroes were in short supply. He accepted the explanation and thanked me. We shook hands and said good night.” In a New York Times op-ed in March 1999,[9] shortly after DiMaggio’s death, Simon discussed this meeting and explained that the line was meant as a sincere tribute to DiMaggio’s unpretentious heroic stature, in a time when popular culture magnifies and distorts how we perceive our heroes. He further reflected: “In these days of Presidential transgressions and apologies and prime-time interviews about private sexual matters, we grieve for Joe DiMaggio and mourn the loss of his grace and dignity, his fierce sense of privacy, his fidelity to the memory of his wife and the power of his silence.” Simon subsequently performed “Mrs. Robinson” at Yankee Stadium in DiMaggio’s honor the month after his death.[10][11]

“Mrs. Robinson” was awarded two Grammy Awards at the 11th Annual Grammy Awards in 1969. It became the first rock song to win Record of the Year (although the previous year’s “Up Up and Away” by the 5th Dimension could also be considered a contender) and it also was awarded the Grammy for Best Contemporary-Pop Performance – Vocal Duo or Group.[7]

The duo were asked to perform the song live at the ceremony, but they declined. Instead, they shot a video for the show set to the music that consisted of them “romping around Yankee Stadium,” a reference to the song’s lyrics concerning DiMaggio.[7]

“Mrs. Robinson” was ineligible for the Academy Award for Best Original Song, as a nominee must have been written exclusively for the film in which it appeared.[7]

The film Rumor Has It… is based on the assumption that The Graduate is based on real events which become uncovered. The song “Mrs. Robinson” is featured in this film as well.

In early January 2010, after news of Iris Robinson (wife of Northern Ireland First Minister Peter Robinson) having an extramarital affair with the (40 years younger) adult child of a family friend became public, a group was set up on Facebook attempting to get the song “Mrs. Robinson” to No.1 in the Official UK Singles Chart for that week via download sales. It received coverage in The Telegraph and other British media.[13][14] It also received coverage in gay-related publications because of the anti-gay principles of Peter Robinson.[15]