I Am A Rock

[Verse 1]
A winter’s day
In a deep and dark December
I am alone
Gazing from my window
To the streets below
On a freshly fallen, silent shroud of snow

[Verse 2]
I’ve built walls
A fortress, steep and mighty
That none may penetrate
I have no need of friendship
Friendship causes pain
It’s laughter and it’s loving I disdain

[Verse 3]
Don’t talk of love
Well, I’ve heard the words before
It’s sleeping in my memory
And I won’t disturb the slumber
Of feelings that have died
If I never loved, I never would have cried

“I Am a Rock” is a song written by Paul Simon. It was first performed by Simon alone as the opening track on his album The Paul Simon Songbook which he originally recorded and released in August 1965, only in the United Kingdom. Paul Simon and Art Garfunkel, as the American folk rock duo Simon and Garfunkel, re-recorded it on December 14, 1965, and included as the final track on their album Sounds of Silence, which they released on January 17, 1966.

The song was not included on Simon & Garfunkel’s first album, Wednesday Morning, 3 A.M., which they released on October 19, 1964. The folk-rock nature of the music makes it unlikely that Simon would have written it much earlier than 1964, when he first began experimenting with the folk genre. Some sources say that it was performed by Simon on January 27, 1965, on a promo show for the BBC.[1] In any case, Simon seems to have written the song before the end of January 1965, and certainly had it down before May, when he recorded it. Thematically, the song deals with isolation and emotional detachment. 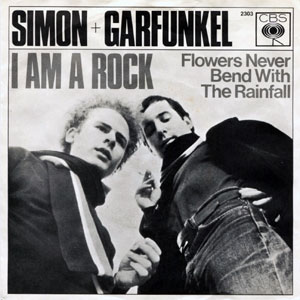 The original version of “I Am a Rock” was first released on The Paul Simon Songbook, and became, in the summer of 1965, the A-side to Simon’s only single released from the album, backed with “Leaves That Are Green” on CBS 201797. Like the album, the single was not a commercial success. It is an extremely rare single to locate. Meanwhile, The Paul Simon Songbook, which for a long time Simon himself had disdained as an album, remained available only in the United Kingdom until 1981.

While Paul Simon was in Europe during the summer of 1965, Tom Wilson, the producer of Wednesday Morning, 3 A.M., responded to requests for “The Sound of Silence” from American radio stations and dubbed an electric guitar and drums onto the original track. He then released the song as a single, whereupon it entered the United States pop charts. When Simon heard about the success of this song, he was still touring in Europe as a poor solo folk singer. He immediately returned to the United States, and in December 1965 he and Garfunkel began a series of hasty recording sessions to match the electric “mold” created by Wilson with many of the other songs that Simon had recorded on the Song Book, including “I Am a Rock,” which was re-recorded during these sessions on 14 December 1965.[2] The result was the album Sounds of Silence, which the duo released the following January. “I Am a Rock” was the fifth and closing track on Side 2 of the record. With “The Sound of Silence” (the opening track), it bookends the rest of the material. This album quickly capitalized on the success of the new album’s title track as a #1 single, and itself rose to #21 on the Billboard charts.

The duo cashed in quickly on their new-found success. They released “I Am a Rock” as a single in the late spring of 1966,[3] and the song reached #3 on the Billboard Hot 100 charts, the third single (chronologically) by Simon & Garfunkel to reach the top 5 (after “The Sound of Silence” and “Homeward Bound“).

This single had two incarnations. First, as a promotion, it was released on red vinyl to radio stations, with a mono mix on one side and a stereo version on the other. These copies are somewhat difficult to locate for collectors. The standard version sold in stores, however, was the black vinyl 45 rpm record with the red Columbia Records label. The B-side was a version of “Flowers Never Bend with the Rainfall,” which was later released on Simon & Garfunkel’s even-more-successful (and critically acclaimed) album Parsley, Sage, Rosemary and Thyme. The single mix of the song features a more prominent lead vocal track (and different phrasing in the opening lines) by Paul Simon, and less reverb, than the more common LP version.

Until 1981, the initial official recording of “I Am a Rock” on The Paul Simon Song Book remained unavailable in North America. This was partly because Simon himself disdained the album, saying on the album’s liner notes:

“This L.P. contains twelve of the songs that I have written over the past two years. There are some here that I would not write today. I don’t believe in them as I once did. I have included them because they played an important role in the transition. It is discomforting, almost painful, to look back over something someone else created and realize that someone else was you. I am not ashamed of where I’ve been and what I’ve thought. It’s just not me anymore. It is perfectly clear to me that the songs I write today will not be mine tomorrow. I don’t regret the loss.”[4]

As a result, the Song Book album was only made available in North America when it was released as part of the box set of albums Paul Simon: Collected Works. The album was not released on CD until March 23, 2004.[5] When it was, Columbia Legacy included two bonus tracks, one of which was an alternate take of “I Am a Rock”, during which one can plainly hear Simon stamping his foot for a beat.