“Cecilia” is a song by American music duo Simon & Garfunkel, released in April 1970 as the third single from the group’s fifth studio album, Bridge over Troubled Water (1970). Written by Paul Simon, the song’s origins lie in a late-night party, in which the duo and friends began banging on a piano bench. They recorded the sound with a tape recorder, employing reverb and matching the rhythm created by the machine. Simon later wrote the song’s guitar line and lyrics on the subject of an untrustworthy lover. The song’s title refers to St. Cecilia, patron saint of music in the Catholic tradition.

The song was a hit single in the United States, peaking at number four on the Billboard Hot 100. On the Cash Box Top 100, it reached number one.

“Cecilia” also did well in Canada, Germany, the Netherlands, and Spain, where it reached number two, and also in Switzerland and Belgium, where it peaked at number three. The song has been the subject of numerous cover versions, most notably by the singer Suggs, whose version featured the ragga duo, Louchie Lou & Michie One and reached number four in the United Kingdom in 1996. 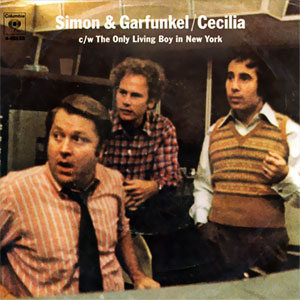 The song’s origins lie in a late-night party attended by the duo and friends.[1] The song’s rhythm was developed by Simon, Garfunkel, and Simon’s younger brother, Eddie. They recorded it for fun utilizing a Sony tape recorder and employing reverberation. In doing so, they were able to synchronize their live rhythm with the reverberating sound on the recording. A friend grabbed a guitar, strumming and punctuating the rhythm with “aahs”.[1]

Simon later found himself coming back to the tape and its infectious quality. While listening to the recording, he composed the song’s guitar line.[2] Simon found a section, the length of shortly over a minute, that he felt had a nice groove. He and producer Roy Halee made a loop of this section, which was not an easy task before the advent of digital recording.[1] The duo later recorded additional elements of the song at Columbia Records’ Gower Street location in Hollywood, typically used for string section recording. Simon & Garfunkel dropped drumsticks on the parquet floor, incorporating their sound into the track. In addition, Simon played random notes on a xylophone, as those elements would be compressed in the final version to where it would not be audible whether or not they were correctly played.[1] Drums were played by veteran Wrecking Crew drummer Hal Blaine.[3][4]

The lyric “making love in the afternoon” was among Simon’s most explicit at the time.[5] Simon states in the 2011 documentary The Harmony Game that, during the song’s initial success, he came upon a recently returned Vietnam War veteran. The man told Simon that soldiers heard the song and found it a sign of the country’s changing mores.[1]

In 2008, Stephen Colbert facetiously asked Simon why the narrator of the song would need to get up and wash his face after making love. Simon noted “Well, it’s the ’60s, so I can’t remember.”[6]

Simon has suggested that the “Cecilia” of the title refers to St. Cecilia, patron saint of music in the Catholic tradition, and thus the song might refer to the frustration of fleeting inspiration in songwriting, the vagaries of musical fame or in a wider sense the absurdity of pop culture.[1] The song is generally interpreted as a lament over a capricious lover who causes both anguish and jubilation to the singer. St. Cecilia is mentioned in another Paul Simon song, “The Coast” (from his 1990 album The Rhythm of the Saints): “A family of musicians took shelter for the night in the little harbor church of St. Cecilia.”

Simon & Garfunkel initially imagined “Cecilia” to be the first real single from Bridge over Troubled Water, following an early release of “The Boxer” in April 1969. Columbia Records chairman Clive Davis instead pressed the duo to instead issue the title track as the lead single.[7]

The song peaked at number four on the Billboard Hot 100, spending 13 weeks on the chart.[8] It also hit number 32 on the magazine’s Easy Listening chart.[8]

The single did not chart in the UK, despite being released as the follow-up to Simon and Garfunkel’s number one hit “Bridge over Troubled Water“, and most copies of the UK single misspelled the title as “Cecelia” on the label.

References in other songs