[Verse 1]
I am just a poor boy though my story’s seldom told
I have squandered my resistance for a pocketful of mumbles, such are promises
All lies and jest, still a man hears what he wants to hear
And disregards the rest, hmmmm

[Verse 2]
When I left my home and my family, I was no more than a boy
In the company of strangers
In the quiet of the railway station, runnin’ scared, laying low
Seeking out the poorer quarters, where the ragged people go
Looking for the places only they would know

[Verse 3]
Asking only workman’s wages, I come lookin’ for a job
But I get no offers
Just a come-on from the whores on 7th Avenue
I do declare, there were times when I was so lonesome
I took some comfort there

[Verse 5]
And I’m laying out my winter clothes and wishing I was gone
Goin’ home
Where the New York City winters aren’t bleedin’ me, leadin’ me
Goin’ home

[Verse 6]
In the clearing stands a boxer, and a fighter by his trade
And he carries the reminders
Of every glove that laid him down or cut him
‘Til he cried out in his anger and his shame
I am leaving, I am leaving, but the fighter still remains

“The Boxer” is a song by the American music duo Simon & Garfunkel from their fifth studio album, Bridge over Troubled Water (1970). Produced by the duo and Roy Halee, it was released as the lead single from the album on March 21, 1969. The song, primarily written by Paul Simon, is a folk rock ballad that variously takes the form of a first-person lament as well as a third-person sketch of a boxer. Simon’s lyrics are largely autobiographical and partially inspired by the Bible, and were written during a time when he felt he was being unfairly criticized. The song’s lyrics discuss poverty and loneliness. It is particularly known for its plaintive refrain, in which the singer sings ‘lie-la-lie’, accompanied by a heavily reverbed drum.

“The Boxer” was the follow-up to one of the duo’s most successful singles, “Mrs. Robinson“. It peaked at No. 7 on the Billboard Hot 100. It performed well internationally, charting within the Top 10 in nine countries, peaking highest in the Netherlands, Austria, South Africa, and Canada. Rolling Stone ranked the song No. 106 on their list of the 500 Greatest Songs of All Time.[1] 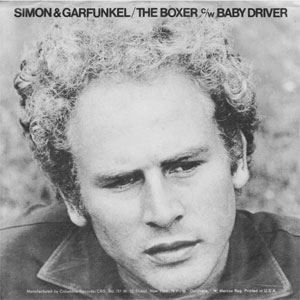 The original recording of the song is one of the duo’s most highly produced, and took over 100 hours to record. The recording was performed at multiple locations, including Nashville, St. Paul’s Chapel in New York City, and Columbia studios in Nashville.[clarification needed]

The version originally released on single by the duo features an instrumental melody played in unison on pedal steel guitar and piccolo trumpet. The song also features a bass harmonica, played by Charlie McCoy,[2] heard during the second and final verses.

I had a baby Martin, which is a 000-18, and when we started the record in New York with Roy Halee, the engineer, and Paul [Simon] was playin’ his Martin—I think it’s a D-18 and he was tuned regular—he didn’t have the song totally written lyrically, but he had most of the melody. And so all I was hearin’ was bits and pieces while he was doin’ his fingerpicking… I think he was fingerpicking in an open C. I tried two or three things and then picked up the baby Martin, which was about a third above his guitar, soundwise.

And I turned down the first string to a D, and tuned up the bass string to a G, which made it an open-G tuning, except for the fifth string, which was standard. Did some counter fingerpicking with him, just did a little backward roll, and lucked into a lick. And that turned into that little roll, and we cut it, just Paul and I, two guitars. Then we started to experiment with some other ideas and so forth. At the end of the day, we were still on the song. Garfunkel was amblin’ around the studio, hummin’, and havin’ input at various times. They were real scientists. They’d get on a part, and it might be there [unfinished] six weeks later.

On my guitar, they had me miked with about seven mics. They had a near mic, a distant mic, a neck mic, a mic on the hole. They even miked my breathing. They miked the guitar in back. So Roy Halee was a genius at getting around. The first time we were listenin’, they killed the breathing mic. And they had an ambient mic overhead, which picked up the two guitars together, I suppose. And so, I was breathin’, I guess, pretty heavy in rhythm. And they wanted to take out that noise, and they took it out and said, ‘Naw, we gotta leave that in.’ That sounds almost like a rhythm on the record. So they left the breathin’ mic on for the mix. I played Tele on it and a 12-string, three or four guitars on it. I was doing different guitar parts. One was a chord pattern and rhythm pattern. Did the Dobro lick on the regular six-string finger Dobro—not a slide Dobro.

I never heard the total record until I heard it on the air… I thought: That’s the greatest record I heard in my life, especially after the scrutiny and after all the time they spent on it and breakin’ it apart musically and soundwise and all of it. There was some magic in the studio that day, and Roy Halee captured it. Paul and I had a really nice groove.

The song’s lyrics take the form of a first-person lament, as the singer describes his struggles to overcome loneliness and poverty in New York City. The final verse switches to a third-person sketch of a boxer, who, despite the effects of “every glove that laid him down or cut him till he cried out”,”I am leaving, I am leaving”—”but”, the lyrics continue, “the fighter still remains.”

The chorus of the song is wordless, consisting of an eight-time chant of “lie-la-lie”. Simon stated that this was originally intended only as a placeholder, but became part of the finished song.

I didn’t have any words! Then people said it was ‘lie’ but I didn’t really mean that. That it was a lie. But, it’s not a failure of songwriting, because people like that and they put enough meaning into it, and the rest of the song has enough power and emotion, I guess, to make it go, so it’s all right. But for me, every time I sing that part… [softly], I’m a little embarrassed.[4]

It has sometimes been suggested that the words represent a “sustained attack on Bob Dylan“.[5] Under this interpretation, Dylan is identified by his experience as an amateur boxer, and the “lie-la-lie” chorus represents allegations of Dylan lying about his musical intentions.[6] Biographer Marc Eliot wrote in Paul Simon: A Life, “In hindsight, this seems utterly nonsensical.”[6]

Bob Dylan in turn covered the song on his Self Portrait album, replacing the word “glove” with “blow.” Paul Simon himself has suggested that the lyrics are largely autobiographical, written during a time when he felt he was being unfairly criticized:

I think I was reading the Bible around that time. That’s where I think phrases such as “workman’s wages” came from, and “seeking out the poorer quarters”. That was biblical. I think the song was about me: everybody’s beating me up, and I’m telling you now I’m going to go away if you don’t stop.[7]

During a New York City concert in October 2010, Paul Simon stopped singing midway through “The Boxer” to tell the story of a woman who stopped him on the street to tell him that she edits the song when singing it to her young child. Simon told the audience that she removed the words “the whores” and altered the song to say, “I get no offers, just a come-on from toy stores on Seventh Avenue.” Simon laughingly commented that he felt that it was “a better line.”[8]

On 3 June 2016 at his concert in Berkeley, California, Paul Simon again stopped singing partway through “The Boxer,” this time to announce in one sentence breaking news: “I’m sorry to tell you this in this way, but Muhammad Ali passed away.” He then finished the song with the last verse: “In the clearing stands a boxer and a fighter by his trade…”[9]

“The Boxer” was originally written with a verse that is not present in the Bridge over Troubled Water version:

This verse was performed by Simon & Garfunkel on tour in November 1969 (this version of the song is included on the Live 1969 album), and sometimes by Simon in solo after the duo’s breakup (on his Live Rhymin’ album and on Late Night with David Letterman in 1987). The duo also added the verse on Saturday Night Live in 1975 and when they reunited for The Concert in Central Park in 1981.

Cover versions of the song have been recorded by Me First and the Gimme Gimmes, Bob Dylan, Neil Diamond, Emmylou Harris, The Samples, Paula Fernandes, Tommy Fleming, Hell Or Highwater, The Celtic Tenors, Bruce Hornsby, Cake and Jonne Järvelä; Harris’ version reached the top fifteen on the US country charts in June 1980. Joan Baez has also made the song a staple of her live concert performances, from the late 1970s to the present, including once in Italy with the Italian songwriter Francesco De Gregori, who was also singing this song during his concerts; Baez performed the song with Paul Simon and Richard Thompson at her 75th Birthday Concert at New York’s Beacon Theater in January 2016. Guitar virtuoso Chet Atkins recorded an instrumental version, in which each verse was played on a different guitar and in a different style. Mumford and Sons‘ 2012 album Babel also includes a cover of the song, which features Jerry Douglas and Simon himself. The punk group SFH recorded a 3:26 second version of it. Waylon Jennings also recorded a version of this song on his 1996 album Right for the Time. The King’s Singers have arranged and recorded an a cappella version of the song.

In 2007, Simon was awarded the inaugural Gershwin Prize by the Library of Congress where “The Boxer” was performed live by Jerry Douglas, Shawn Colvin and Alison Krauss. Also in 2007, country music artist Deana Carter released a cover of the song on her sixth studio album, The Chain, which was recorded as a duet with Harper Simon. In 2008, The Bluecoats Drum and Bugle Corps performed “The Boxer” as their ballad for Drum Corps International, quickly making it a fan-favorite. It still remains one of their main encore pieces. In 2018 Jess & Matt covered the song on their album, Songs from the Village.