He was born in the summer of his 27th year
Comin’ home to a place he’d never been before
He left yesterday behind him, you might say he was born again
You might say he found a key for every door

He climbed cathedral mountains, he saw silver clouds below
He saw everything as far as you can see
And they say he got crazy once, and he tried to touch the sun
And he lost a friend but kept his memory

Now his life is full of wonder but his heart still knows some fear
Of a simple thing he cannot comprehend
Why they try to tear the mountains down
To bring in a couple more
More people, more scars upon the land 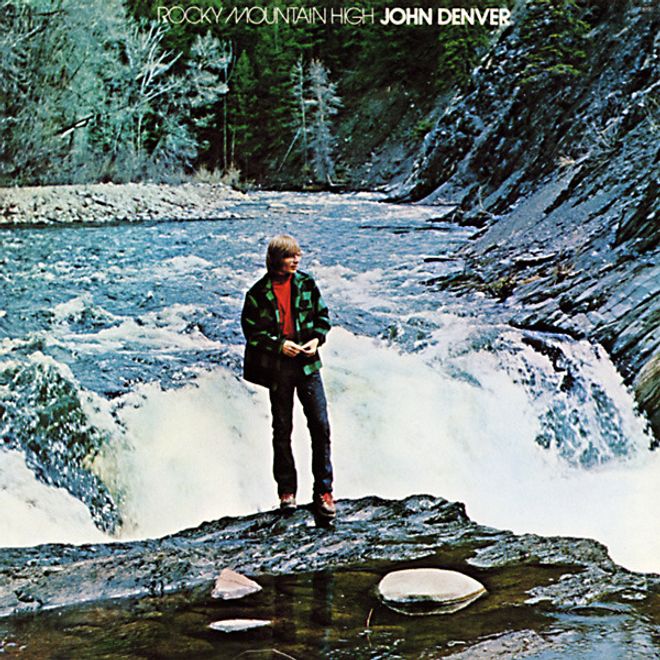 “Rocky Mountain High” is a folk rock song written by John Denver and Mike Taylor about Colorado, and is one of the two official state songs of Colorado.[1] Recorded by Denver in 1972, it went to #9 on the US Hot 100 in 1973. (The song also made #3 on the Easy Listening chart and was played by some country music stations.) Denver told concert audiences in the mid-1970s that the song took him an unusually long nine months to write. On April 10, 2017, the song was certified Gold by the Recording Industry Association of America for sales of 500,000 digital downloads.

Members of the Western Writers of America chose it as one of the Top 100 Western songs of all time.[2] 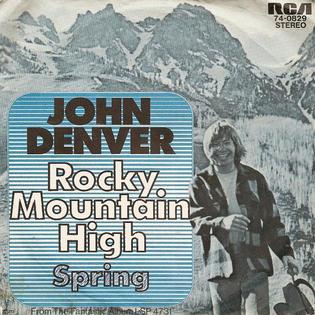 “Rocky Mountain High” is primarily inspired by John Denver’s move to Aspen, Colorado three years before its writing and his love for the state. The seventh stanza makes a reference to destruction of the mountains’ beauty by commercial tourism. The song was considered a major piece of 1970s pop culture and became a well-associated piece of Colorado history.

The song briefly became controversial that year when the U.S. Federal Communications Commission was permitted by a legal ruling to censor music deemed to promote drug abuse. Numerous radio stations cautiously banned the song until Denver publicly explained that the “high” was his innocent description of the sense of peace he found in the Rockies. In 1985, Denver testified before Congress in the Parents Music Resource Center hearings about his experience:

This was obviously done by people who had never seen or been to the Rocky Mountains, and also had never experienced the elation, celebration of life or the joy in living that one feels when he observes something as wondrous as the Perseid meteor shower on a moonless, cloudless night, when there are so many stars that you have a shadow from the starlight, and you are out camping with your friends, your best friends, and introducing them to one of nature’s most spectacular light shows for the first time.[3]

In 2005, the song was performed by a soloist at the NBA all-star game in Denver. After years as an unofficial anthem for Colorado, on March 12, 2007, the Colorado General Assembly made “Rocky Mountain High” one of two official state songs, sharing the honor with “Where the Columbines Grow“.[1] The song was also used in an advertisement for Colorado-based Coors beer.

In late 2007, the John Denver Sanctuary drew some controversy after the last lines of the song were removed from the “Rocky Mountain High” stone.[4]

The song was used as a warning for death in the 2000 film Final Destination, which revolves around the aftermath of an aviation accident, referencing Denver’s death in a plane crash. The song appears numerous times throughout the film as a motif for foreshadowing death.

The song is mentioned in passing in the 1994 film Dumb and Dumber. After driving for several hours in the wrong direction, the two Aspen-bound main characters mistake a desert for the Rockies, mentioning that they “expected the Rocky Mountains to be a little rockier than this…” adding “that John Denver’s full of shit, man”.

In the television show “Coach” the character Christine Armstrong admitted that she spent a year as a John Denver groupie—though she won’t give his name, she says she was his “Rocky Mountain High”; none of the other characters understood to whom she was referring with the song title.