Almost heaven, West Virginia
Blue ridge mountain, Shenandoah river
Life is old there, older than the trees
Younger than the mountains, blowing like a breeze

All my memories, gather round her
Miners’ lady, stranger to blue water
Dark and dusty, painted on the sky
Misty taste of moonshine, teardrop in my eye

I hear her voice in the morning hour she calls me
Radio reminds me of my home far away
Driving down the road I get a feeling
That I should have been home yesterday, yesterday

The song was a success on its initial release and was certified Gold by the RIAA on August 18, 1971, and Platinum on April 10, 2017.[2] The song became one of John Denver’s most popular and beloved songs and is still very popular around the world. It has continued to sell, with over a million digital copies sold in the United States.[3] It is considered to be Denver’s signature song.[4]

The song also has a prominent status as an iconic symbol of West Virginia, which it describes as “almost Heaven”; for example, it was played at the funeral memorial for U.S. Senator Robert Byrd in July 2010.[5] In March 2014, it became one of several official state anthems of West Virginia. 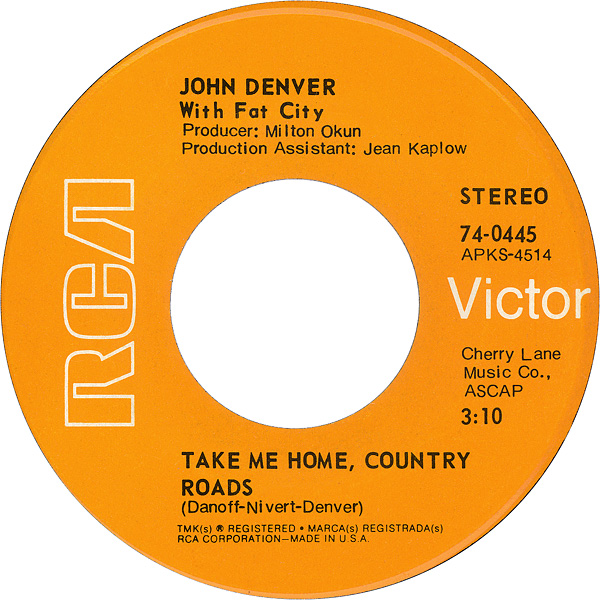 Danoff and his then-wife, Mary (“Taffy”) Nivert, wrote “I Guess He’d Rather Be in Colorado” and “Take Me Home, Country Roads,” both of which were hits for John Denver. Danoff (from Springfield, Massachusetts) has stated he had never been to West Virginia before co-writing the song.[6] Inspiration for the song had come while driving to a family reunion of Nivert’s relatives along Clopper Road[7] in nearby Maryland. To pass the time en route, Danoff had made up a ballad about the little winding roads they were taking. He had even briefly considered using “Massachusetts” rather than “West Virginia,” as both four-syllable state names would have fit the song’s meter.

Starting December 22, 1970, John Denver was heading the bill at The Cellar Door, a Washington, D.C. club. Danoff and Nivert opened for him as a duo named Fat City. After the Tuesday post-Christmas re-opening night (Cellar Door engagements ran from Tuesday to Sunday, and this booking was for two weeks,) the three headed back to their place for an impromptu jam. On the way, Denver’s left thumb was broken in an automobile accident. He was taken to the hospital, where a splint was applied. By the time they got back to the house, he was, in his own words, “wired, you know.”

Danoff and Nivert then told him about the song that they had been working on for about a month. Originally, Danoff and Nivert had planned to sell the song to popular country singer Johnny Cash, but when Denver heard the song and decided he had to have it, the duo who wrote the original lyrics decided not to make the sale.

They sang the song for Denver and as he recalled, “I flipped.” The three stayed up until 6:00 a.m., changing words and moving lines around. When they finished, John announced that the song had to go on his next album.[8]

The song was premiered December 30, 1970, during an encore of Denver’s set, with the singers reading the words from a folded piece of paper. This resulted in a five-minute ovation, one of the longest in Cellar Door history.[9] They recorded it in New York City in January 1971.

“Take Me Home, Country Roads” appeared on the LP Poems, Prayers & Promises and was released as a 45 in the spring of 1971. Original pressings credited the single to “John Denver with Fat City”. It broke nationally in mid-April but moved up the charts very slowly. After several weeks, RCA Records called John and told him that they were giving up on the single. His response: “No! Keep working on it!” They did, and the single went to number 1 on the Record World Pop Singles Chart and the Cash Box Top 100, and number 2 on the U.S. Billboard Hot 100, topped only by “How Can You Mend a Broken Heart” by The Bee Gees.

On August 18, 1971, it was certified Gold by the RIAA for a million copies shipped.[10] The song continued to sell in the digital era. As of September 2017, the song has also sold an additional 1,584,000 downloads since it became available digitally.[11]

“Take Me Home, Country Roads” received an enthusiastic response from West Virginians. The song is the theme song of West Virginia University and has been performed at every home football pre-game show since 1972. In 1977 Denver played for Morgantown High School and even changed the wording to “Appalachian Mountains, Monongahela River”.[citation needed] In 1980, Denver performed the song during pregame festivities to a sold-out crowd of Mountaineer fans. This performance marked the dedication of the current Mountaineer Field and the first game for then head coach Don Nehlen. The song is played for other athletic events and university functions, including after football games, for which the fans are encouraged to stay in the stands and sing the song along with the team.[12]

The land features mentioned prominently in the song lyrics – the Shenandoah River and the Blue Ridge Mountains – have only marginal associations with the state of West Virginia, and would seem to be more appropriate to describe western Virginia. The river passes through only the very eastern tip of the Eastern Panhandle of West Virginia in Jefferson County. Similarly, the vast majority of the Blue Ridge also lies outside the state, only crossing into West Virginia in Jefferson County. According to a radio interview with Nivert, the road is close to her native Washington, D.C., in nearby Montgomery County, Maryland, where Denver often visited. That road – Clopper Road – still exists today, but the landscape has changed drastically from the bucolic scenery that once surrounded it.[15]

The song was played at the funeral memorial for Senator Robert Byrd at the state capitol in Charleston on July 2, 2010.[5]

In 2001, the song was covered by Dutch pop band Hermes House Band and released as “Country Roads“. The band performed the song live on Top of the Pops.