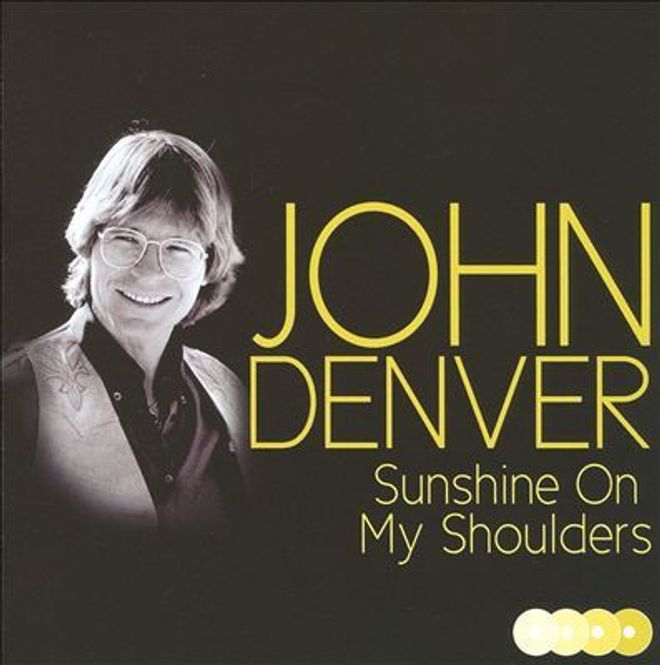 “Sunshine on My Shoulders” (sometimes titled simply “Sunshine“) is a song recorded and co-written by American singer-songwriter John Denver. It was originally released as an album track on 1971’s Poems, Prayers & Promises and later, as a single in 1973. It went to number one on the Billboard Hot 100 chart in the U.S. in early 1974.

Denver described how he wrote “Sunshine on My Shoulders”: “I wrote the song in Minnesota at the time I call ‘late winter, early spring’. It was a dreary day, gray and slushy. The snow was melting and it was too cold to go outside and have fun, but God, you’re ready for spring. You want to get outdoors again and you’re waiting for that sun to shine, and you remember how sometimes just the sun itself can make you feel good. And in that very melancholy frame of mind I wrote ‘Sunshine on My Shoulders’.”

It was originally the B-side of one of his earlier songs, “I’d Rather Be a Cowboy”. As the Vietnam War came to an end, the song took on a new significance and began to receive airplay on adult contemporary radio stations. It entered the Billboard Hot 100 at number 90 on January 26, 1974 and moved into the number one spot nine weeks later, remaining at #1 for one week. The song also topped the adult contemporary chart for two weeks in 1974.[1] Billboard ranked it as the No. 18 song for 1974.

The song also features strings and winds, including oboes.

A 2 1/2-hour made-for-television movie titled Sunshine, which aired on NBC in 1973, used the song as a theme. The movie starred Cliff DeYoung and Cristina Raines. It told the story of a young mother dying from cancer.[2] High ratings prompted a TV series (also Sunshine) which ran for three months during the summer of 1974. The short-lived series began where the movie left off with the young widowed father (DeYoung) raising his stepdaughter (Elizabeth Cheshire). It is said by many who were close to the woman whom the movie was based on including her parents that Denver used quotes from her journals in writing the song. Credit was never given and this may have been part of a lawsuit that was considered if not filed after the release of the movie.

In the movie Super Troopers, the character Farva explains to the rookie Rabbit how John Denver won the country music award for best artist. He refers to Mr. Denver as, “Mr. Sunshine on my God Damn Shoulders” John Denver.

Andy Williams released a version in 1974 on his album, The Way We Were.

In a 1994 episode of The Simpsons, a hippie is seen singing the song during a heat wave, and is subsequently punched in the face by a passing stranger.[3]

In a late-1990s Internet Rumor; John Denver was alleged to be a former CIA sniper and had a technique of distracting his quarry by using a pocket mirror to reflect sunlight onto the target’s shoulder before delivering the kill shot, and was inspired to write the song.

In the John Denver Biopic Take Me Home: The John Denver Story (2000) it is played when Denver (Chad Lowe) takes his new glider out for a Test flight. This final scene is based on the real life event that killed Denver in 1997. The 1996 re-recorded version is the one played.

The song is featured in a 2005 episode of the CBS drama Cold Case, entitled “The Woods”.

The song was covered on Carly Rae Jepsen‘s first studio album Tug of War in 2008, and was released as her first single.

John Denver’s official audio for ‘Sunshine On My Shoulders’. Click to listen to John Denver on Spotify: http://smarturl.it/JohnDenverSpotify?IQid=JohnDSMS