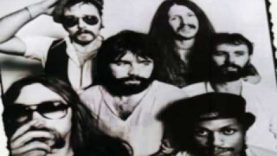 Doobie Brothers: https://thedoobiebrothers.com/
itunes: https://itunes.apple.com/us/artist/the-doobie-brothers/id117992093
What a Fool Believes” is a song written by Michael McDonald and Kenny Loggins. The best-known version was recorded by The Doobie Brothers (with McDonald singing lead vocals) for their 1978 album Minute by Minute. The single reached number one on the Billboard Hot 100 on April 14, 1979, remaining in that position for one week The song received Grammy Awards in 1980 for both Song of the Year and Record of the Year.

“What a Fool Believes” was one of the few non-disco No. 1 hits on the Billboard Hot 100 during 1979. The song lyrics tell a story of a man who is reunited with an old love interest and attempts to rekindle a romantic relationship with her before discovering that one never really existed.

Michael Jackson claimed to have contributed at least one backing track to the original Doobie Brothers recording, but was not credited for having done so

“Copyright Disclaimer Under Section 107 of the Copyright Act 1976, allowance is made for “fair use” for purposes such as criticism, comment, news reporting, teaching, scholarship, and research. Fair use is a use permitted by copyright statute that might otherwise be infringing. Non-profit, educational or personal use tips the balance in favor of fair use.”

The Jimi Hendrix Experience – All Along The Watchtower (Official Audio)

Cat’s In The Cradle