Eric Clapton – Got You On My Mind (Live Video Version) 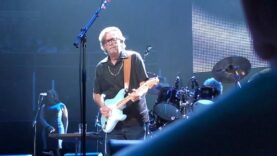 In May of 2005 Cream returned to London’s Royal Albert Hall-to the same stage where they had completed what was thought to be their final performance in 1968. It was one of the most eagerly anticipated, hard-to-get tickets in rock history. With the exception of a brief reunion set at their 1993 induction into the Rock and roll Hall of Fame, Cream had not played together in nearly four decades. This DVD documents Cream’s momentous London shows. Performances from each of the four nights are featured and much more. Also included are alternate performances and interviews with Ginger Baker, Jack Bruce, and Eric Clapton. Cream formed in 1966 and disbanded in 1968. The band were a prolific and thrilling live act and toured incessantly in their short but remarkable history.