[Verse 3]
When I’m tired and thinking cold
I hide in my music, forget the day
And dream of a girl I used to know
I closed my eyes and she slipped away

“More Than a Feeling” is a song written by Tom Scholz and first released by American rock band Boston as the lead single from their self-titled debut album on Epic Records in September 1976, with “Smokin’” on the flipside. The single peaked at number five on the Billboard Hot 100. The track is now a staple of classic rock and in 1999 it was named the 39th best hard rock song of all time by VH1.[1]

His biggest hit, “More Than a Feeling” took writer Tom Scholz five years to complete.[3][4] It is one of six songs, five of which eventually appeared on the Boston album,[5] Scholz worked on in his basement in 1974 and 1975, before Boston got its record contract.[4] The drum parts were originally developed by Jim Masdea, although Sib Hashian played the drums on the official release.[5] The verses are in the key of D major while the chorus is in G major. The song is in compound AABA form.[6]

The Book of Rock Lists suggests that the chorus riff may itself be a subtle homage to the Kingsmen‘s classic, “Louie Louie.” Scholz credits “Walk Away Renee” by The Left Banke as the song’s main inspiration.[7][8]

Boston’s website says the song is about “the power an old song can have in your life,”[9] with Tom Scholz elaborating that “it was sort of a bittersweet ballad.”[10] Ultimate Classic Rock critic Michael Gallucci points out that this is a common theme in Boston songs.[11] The lyrics express the author’s discontent with the present and his yearning for a former love named Marianne, whose memory is strongly evoked by an old familiar song. In an interview Scholz was asked, “Who is Marianne?” He replied, “There actually is a Marianne. She wasn’t my girlfriend.” He explained that when he was 8 or 9 years old he had a much older cousin who he thought was the most beautiful girl he had ever seen and that he was “secretly in love” with her (laughs).[12] But he has also stated that the lyrics were inspired by his emotions after a school love affair ended, and were influenced by the lyrics of the Left Banke song “Walk Away Renee.”[4] Maximum Guitar author Andy Aledort pointed out that the guitar chord progression of G-D/F#-Em7-D that follows the line “I see my Marianne walking away” also comes from “Walk Away Renee.”[4] Aledort also explains that the guitar solo is unusual in that it incorporates mordents and inverted mordents, which are more typically used in baroque music.[4]

When performed live, the power ballad[16] is occasionally played after “The Journey“, since “It’s Easy” has rarely been played live.

Epic released an edited version of the song for the single with the first chorus and second verse removed, clocking in at 3:30 versus the album track at 4:45. That single edit can be found on the Rock installment of Sony’s Soundtrack for a Century box set from 1999. 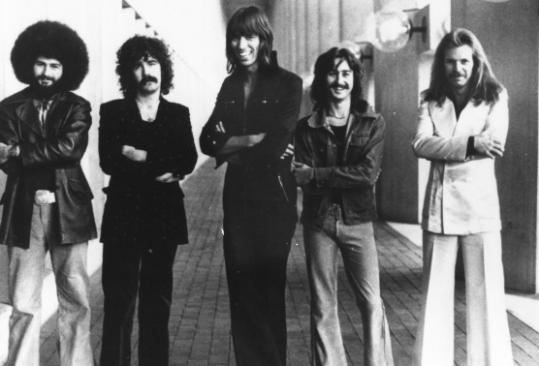 In 2008 Republican presidential candidate Mike Huckabee used the song “More Than a Feeling” to promote his campaign. Former Boston band member Barry Goudreau made appearances with Huckabee both live and on YouTube stating that he was then of the band Boston, though he had been out of the band for over two decades. In February 2008, Scholz wrote to Huckabee requesting that he stop using the song, stating:

While I’m flattered that you are fond of my song, I’m shocked that you would use it and the name Boston to promote yourself without my consent.

Your campaign’s use of “More Than a Feeling”, coupled with the representation of one of your supporters as a member “of Boston” clearly implies that the band Boston, and specifically one of its members, has endorsed your candidacy, neither of which is true.[20]

Huckabee complied with Scholz’s request, and videos featuring Barry Goudreau and the song were subsequently removed by the Huckabee Campaign.

The song is a part of the soundtrack for the original Guitar Hero (video game) series released in 2005.[32]

The song was made available to download on March 1, 2011, for use in the Rock Band music video game series.[33]

The song is also available as downloadable content (DLC) for the Rocksmith guitar learning game. The song is available individually or as part of the ‘Rock Hits 70s’ Song Pack along with “Jessica” by The Allman Brothers Band and Deep Purple‘s “Smoke on the Water.”[34]

Most MYSTERIOUS Lost Worlds On Earth!