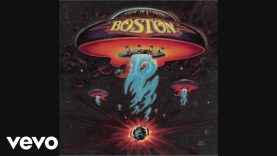 [Verse 1]
It’s been such a long time
I think I should be goin’, yeah
And time doesn’t wait for me, it keeps on rollin’
Sail on, on a distant highway
I’ve got to keep on chasin’ a dream
I’ve gotta be on my way
Wish there was something I could say

[Hook]
Well I’m takin’ my time, I’m just movin’ along
You’ll forget about me after I’ve been gone
And I take what I find, I don’t want no more
It’s just outside of your front door

[Verse 2]
Well I get so lonely when I am without you
But in my mind, deep in my mind
I can’t forget about you
Good times, and faces that remind me
I’m tryin’ to forget your name and leave it all behind me
You’re comin’ back to find me

[Verse 3]
Yeah. It’s been such a long time, I think I should be goin’, yeah
And time doesn’t wait for me, it keeps on rollin’
There’s a long road, I’ve gotta stay in time with
I’ve got to keep on chasin’ that dream, though I may never find it
I’m always just behind it

“Foreplay/Long Time” is a song written by Tom Scholz and first performed by the rock band Boston on the band’s eponymous debut album, and as their second single, on Epic Records in 1976. It combines an instrumental introduction, “Foreplay”, to the main song “Long Time”, generally played as one on the radio and listed as one track on the album. “Long Time” peaked at No. 22 on the Billboard Hot 100 the week ending March 5, 1977.[1] It reached the Top 10 in Canada, peaking at No. 9.[2] The standalone “Foreplay” was released as the B-side of Boston’s next single “Peace of Mind“, which was released in April.[3]In an interview for the Best of Boston CD, Scholz said that “Foreplay” was the first song he ever recorded, and he did this on a two-track machine in his basement.[4] Scholz also stated that it was the first piece of music he ever wrote, and that he wrote it as far back as 1969.[5][6][7]

An alternate mix of the song is available on the Epic Records Promo LP It’s a Knockout. It was a sampler LP of artists that had releases coming up in 1976. This version has various differences in the mix and effects and also includes extra lyrics towards the end of the song. This version has never been available officially anywhere else.

“Foreplay” is a progressive instrumental prelude, primarily consisting of rapid triplet arpeggios on a Hammond M-3 organ (contrary to popular belief, the song was not recorded on a B-3, as Tom Scholz had a limited budget at the time and was unable to afford one) with a bass part doubled by a clavinet, and drums, with lead guitar joining at the end. According to Scholz, leader and producer of Boston, the synthesizer-like swoops were produced by scraping a pick across the strings of an electric guitar in conjunction with distortion and delay.

The three guitar solos on “Long Time” are played by Barry Goudreau, rather than Scholz, who played most of the guitar parts on Boston. Goudreau also plays the solo in “Let Me Take You Home Tonight”.[7] Scholz played the solos in “More Than a Feeling”, “Peace of Mind”, “Rock & Roll Band”, and “Something About You”.

Rolling Stone described “Foreplay/Long Time” as “a perfect marriage of Led Zeppelin and Yes that plays musical chairs with electric and acoustic sounds.”[8]

In 2004, “Long Time” was used as the background music for a series of television commercials, titled “Timeless”, for NASCAR, featuring a hypothetical race between drivers and cars of all eras of NASCAR competition. It was featured on YouTube on a Best of NASCAR 2013 video.

In 2006, “Foreplay” is featured near the end of The Sopranos episode “The Fleshy Part of the Thigh” (Season 6, Episode 4). Tony Soprano is playing it to obscure a conversation in case a room is bugged.

“Foreplay/Long Time” is featured as a playable track in the video game Rock Band. It is the final song in the Vocal Solo Tour. The track was played during Part 1 of the Season 2 finale of the television show Supernatural.

“Foreplay/Long Time” was featured in an episode of the television series 24/7 Penguins/Capitals: Road to the NHL Winter Classic in 2010.

“Foreplay/Long Time” was heard before a commercial break during NBC‘s coverage of Super Bowl XLVI on February 5, 2012.