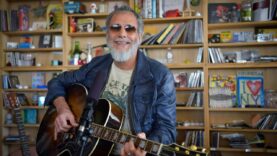 In the summer of 1971, I was a camp counselor at a sleep-away camp for a bunch of 5- to 7-year-olds. For those eight weeks, I walked home with about $50. I bought a guitar and began to learn the songs I’d come to love from the recently released Tea for the Tillerman by Cat Stevens.

“Father and Son” touched me most — it’s a song about growing old, and about beliefs and conviction. More than 40 years later, that songwriter is performing at my desk with his son standing right behind me. You can never imagine the turns life will take.

Nor could he. In 1976, Cat Stevens almost drowned off the coast of Malibu. In his panic, he says, he shouted, “Oh, God! If you save me, I will work for you” — at which point he recalls a wave that came and carried him ashore. He converted to Islam, changed his name and left the pop world after one last album in 1978.

He finally returned in 2006, and now we have a new record, Tell ‘Em I’m Gone. From that album of great blues covers and originals, produced with Rick Rubin, Yusuf plays some powerful new music, as well as the 1967 classic “The First Cut Is the Deepest” — and then brought me to tears by dedicating a version of “Father and Son” to me. As I walked around the office after this Tiny Desk Concert, I heard one story after another of an artist who has touched so many. It’s a joy to have him back. –BOB BOILEN