Look out your window
That grass ain’t green
It’s kinda yellow
See what I mean?

It’s so hard to figure what it’s all about

Look down your drainpipe
What color do you see?
It’s got to be yellow
Don’t try to fool me

And don’t it make you wanna twist and shout?

Ain’t no shadow of doubt
Don’t it make you wanna twist and shout?

(Inside out)
(Right side up)
Yeah, don’t it make you wanna twist and shout
When you’re inside out?
Inside out
Inside out

“Inside Out” is a song by the British–American supergroup the Traveling Wilburys from their 1990 album Traveling Wilburys Vol. 3. It was written by all four members of the band, and it was the first song they worked on for the album. The lyrics address environmental issues and describe a world turned yellow. Recording for the track began at a private studio in Bel Air in Los Angeles, in April 1990, and was completed three months later at George Harrison‘s Friar Park studio in England. The song was issued as a promotional single in the United States, where it peaked at number 16 on Billboard‘s Mainstream Rock chart. In Germany, it was released on a commercial single, backed by an instrumental version of “New Blue Moon”. 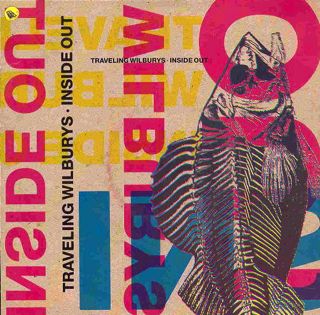 “Inside Out” was the first song written and recorded for the Wilburys’ second album,[1] which they jokingly titled Vol. 3.[2] With the group reduced to a four-piece following the death of Roy Orbison in December 1988, the band gathered at a private house they dubbed “Camp Wilbury”,[3] at the top of Coldwater Canyon in Bel Air,[4] in April 1990, for the combined writing and recording sessions.[5] George Harrison recalled that he, Tom Petty, Jeff Lynne and Bob Dylan had the musical part of the song finished “within an hour” of starting work.[6] Harrison said this encouraged him to realise that the band would be able to continue as before, despite the loss of Orbison.[6]

The song addresses environmental issues.[7] The lyrics refer to a world where the sky, the grass and drain water have all mysteriously turned yellow. The principal singers are Dylan and Petty,[8] with Harrison taking over during the bridge.[9] Author Ian Inglis identifies the main narrative as a seemingly “private … joke” between Dylan and Petty, whereas Harrison’s section provides a welcome element of musical and lyrical intrigue in which, “stressing the need to be watchful, he warns that ‘something’s happening out there.'”[8]

The Wilburys, together with their drummer, Jim Keltner,[10] recorded the basic track for “Inside Out” in Bel Air.[3] As with all the songs on the album, other instrumentation and the vocals[11] were overdubbed at Harrison’s Friar Park studio in July.[3]

The song was sequenced as the second track on Vol. 3, between “She’s My Baby” and “If You Belonged to Me”.[12] The album was released on the band’s Wilbury record label on 29 October 1990 in the UK and November 6 in the United States.[12]

Authors Chip Madinger and Mark Easter describe “Inside Out” as arguably the most commercial track on Vol. 3.[13] Warner Bros. Records, which distributed Wilbury Records, considered the song for release on a commercial single in the US but, as with “She’s My Baby”, decided to issue it only as a promotional single there.[13] The song was given a commercial single release in Germany, however, with an instrumental version of the Vol. 3 track “New Blue Moon” as the B-side.[14] The band filmed a music video for “Inside Out”,[13] in which the four Wilburys and Keltner are seen performing the track.[15] Set on a concert stage, the original clip began with the sound of an orchestra warming up and closed with muted applause.[13] In the US, the song peaked at number 16 on Billboard‘s Mainstream Rock chart.[16]

Writing for the website Ultimate Classic Rock, Frank Mastropolo says that Vol. 3 suffered from having its best track, “She’s My Baby”, sequenced as the album opener, but he includes “Inside Out” among the songs that show that the album was still “not without its moments”. He adds that the adoption of shared lead vocals “[echoes] the give-and-take that made the first album so popular”.[17] In her album review for New York magazine in 1990, Elizabeth Wurtzel wrote: “The Wilburys deserve praise for delivering songs about the environment (‘Inside Out’) and other issues with a fun, doo-wop tone that is never preachy but also never downplays the seriousness of the subject matter … Somehow, the combination of talent has allowed them to come up with songs that can be heartbreaking and frightening.”[7]

In another contemporary review, Greg Kot of the Chicago Tribune welcomed the song’s musical quote from the Byrds‘ “Chimes of Freedom“, pairing it with the Wilburys’ rewriting of the standard “Blue Moon” as “7 Deadly Sins”, and said that “For all its disposability, this record is loaded with charm.”[18] Writing in Rolling Stone in 2002, Kot cited “Inside Out” among examples of Vol. 3‘s “ingratiating goofiness” and said that, more so than the band’s debut, the album demonstrated the Wilburys’ embrace of a “common vernacular in the rock & roll of the Fifties and early Sixties”.[19] In his review of the 2007 box set The Traveling Wilburys Collection, for Mojo, Phil Sutcliffe said that “Inside Out”, “If You Belonged to Me” and “You Took My Breath Away” represented the “engaging sort of pop-rocking” typical of Vol. 3 and that, when played next to Vol. 1, “you can’t hear the join.”[20]