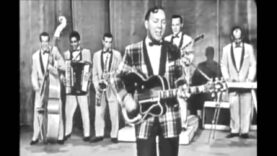 “Save the Last Dance for Me”

Shake, Rattle and Roll – Bill Haley and his Comets