Pink Floyd – Another Brick In The Wall (HQ)

Pink Floyd – Another Brick In The Wall (HQ) 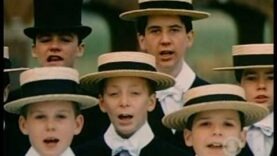 Pink Floyd – Another Brick In The Wall

This single is by far Pink Floyd’s greatest ever mainstream success, instantly attaining classic status, and is perhaps their most famous piece of work.

ABINTW Pt. 2 even became the protest song of a group of South African students during the apartheid regime, the song was subsequently banned in South Africa.

The song itself is a protest against the rigidity of British schools, and in particular, the boarding school system Waters would have been part of as a young boy.

The schoolteacher in this video was portrayed by the late, great, Scottish actor Alex McAvoy who passed away in June 2005.

If you haven’t seen “The Wall” I would Highly recommend you to do so.