Neil Diamond – Love On The Rocks

Neil Diamond – I Am, I Said 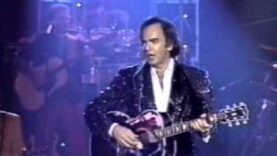 Neil Leslie Diamond (born on January 24, 1941) is an American singer-songwriter. As a successful pop music performer, Diamond scored a number of hits worldwide in the 1960s, 1970s, and 1980s. According to David Wild, common themes in Diamond’s songs are “a deep sense of isolation and an equal desire for connection. A yearning for home — and at the same time, the allure of greater freedom. The good, the bad and the ugly about a crazy little thing called love.”

As of 2001 Diamond has 115 million records sold worldwide, including 48 million records in the U.S. In terms of Billboard chart success, he is the third most successful Adult Contemporary artist ever, ranking behind only Barbra Streisand and Elton John.

Though his record sales declined somewhat after the 1980s, Diamond continues to tour successfully, and maintains a very loyal following. Diamond’s songs have been recorded by a vast array of performers from many different musical genres.

“I Am…I Said” took Diamond four months to compose. One of his most intensely personal efforts, it depicts the singer lost between two worlds:

Well, I’m New York City born and raised
But nowadays, I’m lost between two shores
L.A.’s fine, but it ain’t home —
New York’s home but it ain’t mine no more …

Verses start quietly in a low vocal range, half sung and half spoken, with a soft rock guitar and light strings backing. By the chorus climaxes, the vocals are much louder and higher in pitch, with horns, heavier drums and more strings joining in, but the singer even more uncertain:

“I Am…I Said” was later included on Diamond’s November 1971 album Stones. The single version leads off the LP, while a reprise of the song, taken from midway to a variant ending with Diamond exclaiming “I am!”, concludes.

Critical opinion on “I Am…I Said” has generally been good, with Rolling Stone calling its lyric excellent in a 1972 review, while The New Yorker used it to exemplify Diamond’s songwriting opaqueness in a 2006 retrospective. A 2008 Diamond profile in The Daily Telegraph simply referred to the song’s “raging existential angst,” and Allmusic calls it “an impassioned statement of emotional turmoil … very much in tune with the confessional singer/songwriter movement of the time.”

“I Am…I Said” has been included in live versions on Diamond’s Hot August Night (from 1972, in a performance that Rolling Stone would later label “fantastically overwrought”) and The Greatest Hits: 1966-1992 (from 1992), as well as in various compilations. ~SOURCE: Wikipedia

PLEASE NOTE: I divided my uploads among multiple channels, Bookmark this link in your browser for instant access to an index with links to all of John1948’s oldies classics. LINK: http://john1948.wikifoundry.com/page/John1948%27s+Youtube+Index

Neil Diamond Live Play Me + I Am I Said, Live