Johnny Cash – I Walk the Line

[Verse]
San Quentin, you’ve been livin’ hell to me
You’ve hosted me since nineteen sixty three
I’ve seen ’em come and go and I’ve seen them die
And long ago I stopped asking why

San Quentin, I hate every inch of you
You’ve cut me and have scarred me through and through
And I’ll walk out a wiser weaker man
Mister Congressman, you can’t understand

San Quentin, what good do you think you do?
Do you think I’ll be different when you’re through?
You bent my heart and mind and you warp my soul
And your stone walls turn my blood a little cold

San Quentin, may you rot and burn in hell
May your walls fall and may I live to tell
May all the world forget you ever stood
And may all the world regret you did no good

[Outro]
San Quentin, I hate every inch of you.

At San Quentin is the 31st overall album by Johnny Cash, recorded live at San Quentin State Prison on February 24, 1969 and released on June 4 of that same year. The concert was filmed by Granada Television, produced and directed by Michael Darlow.[1] The album was the second in Cash’s conceptual series of live prison albums that also included “At Folsom Prison” (1968), “Pa Osteraker” (1973), and “A Concert Behind Prison Walls” (1976).

The album was certified gold on August 12, 1969, platinum and double platinum on November 21, 1986, and triple platinum on March 27, 2003 by the RIAA. It is the second best selling live album of all time surpassed only by its conceptual predecessor, “At Folsom Prison”. The album was nominated for a number of Grammy Awards, including Album of the Year and won Best Male Country Vocal Performance for “A Boy Named Sue.”

There have been several releases with different songs and set order. The album cover photo by Jim Marshall is considered to be an iconic image of Cash, with Marshall Grant‘s Epiphone Newport bass guitar famously silhouetted in the foreground. 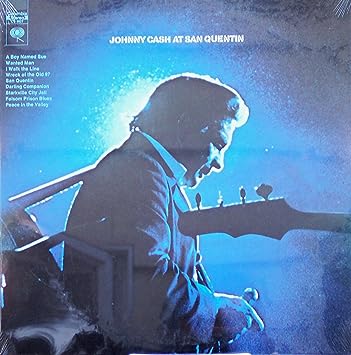 Johnny Cash had previously recorded a concert at prison in 1968 at Folsom Prison, This concert was recorded for a live LP and a television documentary for the UK. On the original LP release, the song order was changed and several songs were cut, presumably for space reasons. Despite the timing limitations of the vinyl LP format, however, both performances of the song “San Quentin” (Cash agreed to perform an encore at the audience’s request) are included on the original album. Some of the songs were censored. Despite the title of the version released on CD in 2000 – At San Quentin (The Complete 1969 Concert) – the CD does not contain the entire concert uncut, but does feature additional tracks and running order that parallels the actual setlist. In 2010, the album was reissued on vinyl by Sundazed Records with the original Columbia catalog number LP 5362. The reissued Sundazed vinyl is an exact copy of the original record except that the back cover has a barcode and indicates it is a Sundazed issue. Performed but not included were the songs “Jackson” and “Orange Blossom Special“, which are included in the video release of the show (both songs had been included in At Folsom Prison). Two songs were somehow slowed down by half a step (“Starkville City Jail” and “Blistered”), possibly due to using another tape machine while the tape on the original machine was changed.

This was Cash’s first album recorded without his longtime lead guitar player and Tennessee Two founder Luther Perkins, who had died several months earlier. On the album, Cash is heard paying tribute to Perkins (who was not related to Carl Perkins, who appears on the recording as lead guitarist on several tracks).

Two songs are performed live on stage for the first time during the show: “San Quentin” and “A Boy Named Sue”. According to biographer Robert Hilburn, the decision had already been made for Cash to perform “San Quentin” twice as it was considered the major new song of the set, though on record Cash makes it appear as if the encore is due to audience demand; producer Bob Johnson ultimately chose to include both versions of the song on the album. According to Hilburn, Cash spontaneously decided to perform “A Boy Named Sue” during the show and neither the TV crew nor his band knew he planned to do it (though he gave them advance warning by announcing early in the show his intent to play it); he used a lyric sheet on stage while Perkins and the band improvised the backing.[2]

At the Dutch 1969 CBS Vinyl LP, is the CBS number S-63629 printed at the top left of the cover. The songs are the same (including “San Quentin” twice at side two), but the song’s lengths are not presented officially.[3] A crew from Granada Television in the UK filmed the concert for broadcast on television. In the extended version of the concert released by Columbia/Legacy in 2000, Cash is heard expressing frustration at being told what to sing and where to stand prior to his performance of “I Walk the Line”. The famous image of an angry-looking Cash giving the middle finger gesture to a camera originates from the performance; in his liner notes for the 2000 reissue, Cash explains that he was frustrated at having Granada’s film crew blocking his view of the audience. When the crew ignored his request to “clear the stage”, he made the gesture.[4]

The album was nominated for a number of Grammy Awards, including Album of the Year and won Best Male Country Vocal Performance for “A Boy Named Sue.”

Several tracks on the original LP are preceded by several minutes of Cash talking to the audience, including a tangent where Cash is recorded trying to get his guitar tuned on stage. The original LP release bleeps profanity, including on “A Boy Named Sue” but later issues including the Legacy edition are uncensored. The original album’s closing track “Folsom Prison Blues” is a partial performance of the song edited from a longer medley available in complete form in later reissues.