I was totin’ my pack along the dusty Winnemucca road
When along came a semi with a high an’ canvas covered load
“If you’re goin’ to Winnemucca, Mack, with me you can ride”
And so I climbed into the cab and then I settled down inside
He asked me if I’d seen a road with so much dust and sand
And I said, “Listen, I’ve traveled every road in this here land”

“I’ve Been Everywhere” is a song which was written by Australian country singer Geoff Mack in 1959, and made popular by Lucky Starr in 1962.

The song as originally written listed Australian towns. It was later adapted by Australian singer Rolf Harris with English and Scottish toponyms (1963),[1] and by John Hore (later known as John Grenell) with New Zealand toponyms (1966). In 1962, the song was a number-one US country hit for Hank Snow.[2] The song was also recorded by Lynn Anderson (US 1970), Asleep at the Wheel (US 1973), Johnny Cash (US 1996), Ted Egan, the “Farrelly Brothers” from the television series The Aunty Jack Show (Australia 1974, a parody version, on the album Aunty Jack Sings Wollongong),[3] John Grenell (NZ 1966), Mike Ford (Canada, 2005), The Sunny Cowgirls and the Statler Brothers. Harvey Reid also included the song in his Dreamer or Believer album. Also recorded by Kacey Musgraves on her album Movin’ On(2003). 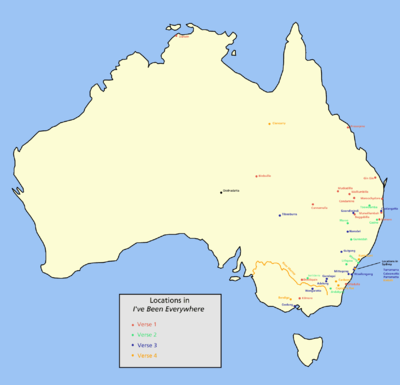 Some of the locations in the Australian version

The Australian version starts: “Well, I was humpin’ my bluey[nb 1] on the dusty Oodnadatta road, When along came a semi with a high and canvas-covered load, ‘If you’re goin’ to Oodnadatta, mate, um, with me you can ride,’ so I climbed in the cabin, and I settled down inside, He asked me if i’d seen a road with so much dust and sand, I said listen mate, I’ve travelled every road in this here land. ‘Cause…”

The toponyms listed are:

For some of the above, more than one place in Australia has the same name (e.g. Coolangatta, Gin Gin, and Fingal). The links given above are the most famous locations with those names.

Geoff Mack’s music publisher offered the song to Canadian-born country musician Hank Snow in 1962. Snow thought the song had potential for the Canadian and American markets, but only if the toponyms were adapted to North America. At his publisher’s urging, Geoff Mack consequently rewrote the song using a North American atlas supplied to him by the publisher. The North American version starts: “I was totin’ my pack along the dusty Winnemucca road”. Below are the places mentioned in this version of the song, most of which are in the continent of North America, but four are in Central and South America (Costa Rica, Barranquilla, Tocopilla, and Argentina):

The New Zealand version starts: Well I was hitching a ride on a winding Hokitika road, when along came a lorry….

Lucky Starr’s Great Britain and Ireland version starts: “I was peddlin’ me bike on a narrow road near Brighton sea, When along came a lorry and pulled up alongside o’ me, ‘Ere chuck your bike up on the back cop and with me you can ride, So I climbed up in the cabin and I settled down inside, He told me of the towns he’d seen and bashed me ear for several miles, I said ‘ere, mug it cop, I’ve been to every town in these ‘ere isles.”

Covers of this version were also recorded by the British group The Mudlarks and by Australian singer Rolf Harris, who added a few tongue-twisting Scottish placenames but (humorously) found them so hard to pronounce he said, “Better get back to the English version,” and concluded with the final verse above.[1]

Aunty Jack
“I’ve been to Wollongong (x 14), Dapto, Wollongong.” (Dapto is a suburb of Wollongong.)

Canada
Stompin’ Tom Connors adds an extra spoken segment of locations in Ontario and a verse for locations in the Maritimes. He also substitutes Canadian cities, including Halifax and Montreal, at various points in the other verses. Mike Ford, formerly a member of Moxy Früvous, did an all-Canadian version for his album, Canada Needs You, in 2005. Ford’s version includes the fictional town of Melonville, home of SCTV. Canadian comedian Rick Moranis has a version called “I Ain’t Goin’ Nowhere” where he sings about why he will not leave his easy chair. Canadian comedy duo MacLean & MacLean wrote a parody entitled “I’ve Seen Pubic Hair.” It first appeared on their 1976 album Bitter Reality as part of the live piece “Bland Ole Opry (Slim Chance, Stretch Marks)”, and then a studio version with an added verse was featured on their 1980 album Suck Their Way to the Top/Take the “O” Out of Country. The song lists various types of pubic hairs that the singer has seen, including “…great ones, straight ones, on my dinner plate ones, long ones, strong ones, little curly blonde ones, red ones, dead ones, layin’ on the head ones”. George Fox released his version in 1988.

Eugene Chadbourne
The US entertainer recorded a version on his 1988 album, also entitled I’ve Been Everywhere. He starts with Hank Snow’s opening verse and then rattles off city names from all over the world (including Bogota, Khartoum, and Nairobi), throws in a gentle poke at Neil Young and Farm Aid, and ends with Eugene declaring only one place he has not been to – Alcatraz.[citation needed]

Germany (adapted by Jackie Leven)
“I was walking down the Ku’damm in the City of Berlin.” Complete with an entire verse of Baden-Baden. Published on the 2007 album Oh What A Blow That Phantom Dealt Me![citation needed]

Louisiana (adapted by Choupique)
The Cajun band Choupique recorded and performed a version of the song that listed places and communities in Louisiana.

Texas (adapted By Brian Burns)
“I was totin’ my pack along the dusty Amarillo road”.[citation needed]

New York City (adapted by Cody Marshall)
Award-winning parodist and comedian Cody Marshall recorded and performed a version of the song that listed places and communities in New York.

World (adapted By Medeski Martin and Wood)
“This jazz group made a children-oriented version titled ‘Let’s Go Everywhere’, using city names from all over the world.”[citation needed]

Kris Kristofferson also did an abbreviated version in the 1973 film Pat Garrett and Billy the Kid during his escape scene.

In October 2003, the publisher Rightsong Music BMI granted permission to Frank Loconto to write new lyrics and title for the 2004 presidential campaign of Bob Graham. Title: “I’ve Done Every Job, Man” commemorating the more than 300 ‘workdays’ performed by Graham during his 30 plus years of public service to the people of Florida. The song recorded by Frank Loconto FXL Records was included in a promotional CD Bob Graham Charisma Album 2004.

Australian Peter Harris visited all the locations in the Australian version of “I’ve Been Everywhere” between December 2009 and July 2011. A record of his trip is located here.[6]

In 2010, the Swedish band Movits! used the track for one of the episodes of their US tour movie, First We Take Manhattan.[7]

Bruce Springsteen used the song as a snippet for “Light of Day” during his 1999-2000 Reunion tour.

Johnny Cash – You are my Sunshine Original