Tekashi 6ix9ine FAILS Crowd Surf AGAIN and No One Catches Him 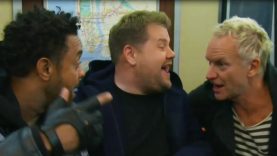 James Corden teamed up with Shaggy and Sting for subway karaoke while simultaneously driving all of the commuters insane.

In LA, karaoke is done in the car, but in New York it’s all about the subway.

Even though it was totally staged and all the passengers on the train were totally paid actors, the concept was cute.

They did their best to entertain the train commuters, singing everything from Shaggy’s hit “It Wasn’t Me” to Sting’s “Every Breath You Take” but to say the passengers were not amused would be an understatement. In fact they were completely annoyed which then escalated to James, Sting, and Shaggy getting in a physical altercation with a construction worker.

Cute right? James of course was the host of the Grammys this year so you know they had to throw in a Carpool Karaoke moment with musical references. What did you guys think of the sketch and better yet what would you do if you actually saw Sting and Shaggy singing on a train? Let me know in the comment section below. Thanks for watching our Grammy coverage – And click here (host points) to subscribe to our channel to get all the latest celebrity news & gossip!” I’m your host Drew Dorsey and I’ll see you next time.

For More Clevver Visit:
There are 2 types of people: those who follow us on Facebook and those who are missing out http://facebook.com/clevver

Add us to your circles on Google+: http://google.com/+ClevverNews
Tweet Me: http://www.twitter.com/drew__dorsey