Billy Joel – You May Be Right (Audio)

Billy Joel – Tell Her About It (Official Video)

Billy Joel – Let It Be (from Live at Shea Stadium) ft. Paul McCartney 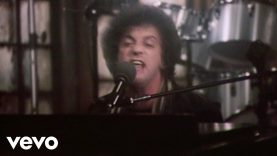 In 1978, Billy Joel released his album 52nd Street, which won two Grammy Awards for ‘Album of the Year’ and ‘Best Male Pop Vocal Performance’. Watch the official music video for ‘Big Shot’, which became a Top 20 hit on the US Billboard Hot 100 chart.

Lyrics:
Well you went uptown riding in your limousine
With your fine Park Avenue clothes
You had the Dom Perignon in your hand
And the spoon up your nose
And when you wake up in the morning
With your head on fire
And your eyes too bloody to see
Go on and cry in your coffee
But don’t come bitchin’ to me

Billy Joel’s official YouTube channel features music videos, live performances, interviews, TV appearances and more. Best known for his first hit song, ‘Piano Man’, in 1973, Billy has written and recorded thirty-three Top 40 hits in the United States. He is a six-time Grammy Award winner, a 23-time Grammy nominee and one of the world’s best-selling artists of all time, having sold over 150 million records worldwide. Billy Joel is the sixth-best-selling recording artist and the third-best-selling solo artist in the United States.

Billy Joel – Let It Be (from Live at Shea Stadium) ft. Paul McCartney

Billy Joel – I Saw Her Standing There (from Live at Shea Stadium) ft. Paul McCartney

Billy Joel Through The Years

Billy Joel – Just the Way You Are