[Verse 1: Benjamin Orr]
She’s driving away
With the dim lights on
And she’s making a play
She can’t go wrong
She never waits too long
She’s winding them down
On her clock machine
And she won’t give up
Cause she’s seventeen
She’s a frozen fire
She’s my one desire

[Pre-Chorus]
And i don’t want to hold her down
Don’t want to break her crown
When she says, let’s go

[Pre-Chorus]
And I don’t want to hold her down
Don’t want to break her crown
When she says, let’s go

“Let’s Go” was the first single from The Cars‘ second studio album Candy-O. It was released in 1979 on Elektra Records. The song was written by Ric Ocasek and features lead vocals by Cars bassist Benjamin Orr. 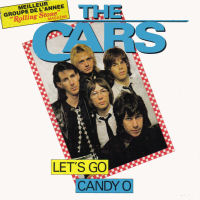 “Let’s Go” was described by Brett Milano as “another double-edged anthem” in the liner notes for Just What I Needed: The Cars Anthology.[1] AllMusic critic Donald Guarisco called the track “a tight new wave rocker that married the sardonic humor and new wave quirkiness of their previous singles to an easily accessible pop melody.”[2]

The song’s signature hook is a series of claps followed by a shouted “Let’s go!”, which is derived from the 1962 instrumental of the same name by The Routers, as well as a simple synth melody played by Greg Hawkes, using the Sync II lead preset (or a slight variation of it) from a Prophet-5 synthesizer. The song tells the story of a 17-year-old girl and her budding interest in “the nightlife“.

The single peaked at #14 on the Billboard Hot 100 singles chart in the US,[3] making it the first song by The Cars to reach the Billboard top 20. The song was an even bigger success elsewhere, hitting the top 10 in multiple countries. In Canada, the track reached #5, and remains the Cars’ highest ever charting single in that country. Similarly, “Let’s Go” peaked at #6 in Australia, where it remains The Cars’ highest charted hit.

Rolling Stone critic Tom Carson called “Let’s Go” “the best cut on [Candy-O]”, while the Billboard review of Candy-O listed the song as one of the “best cuts”.[4] William Ruhlmann, author of The All-Music Guide to Rock, said, “‘Let’s Go’ (the Cars’ biggest hit so far) became one of the summer songs of the year,” and Hamish Champ, writer of The 100 Best-Selling Albums of the 70s, said the track (as well as its follow-up, “It’s All I Can Do“), “give ample evidence of the band’s range”.[4] AllMusic reviewer said the track “proves to be the best track [on Candy-O]”, while Donald Guarisco, also of AllMusic, said “its streamlined pop style paved the way for future Cars hits like ‘Shake It Up‘ and ‘Magic‘.”[5]

The song’s B-side is a non-album track titled “That’s It” that features Benjamin Orr on lead vocals.