The Beatles at Shea Stadium

The Beatles – Please Please Me

The Beatles – A Hard Day’s Night

The Beatles – Eight Days A Week

The Beatles – Ticket To Ride

Paul McCartney Breaks Down His Most Iconic Songs | GQ 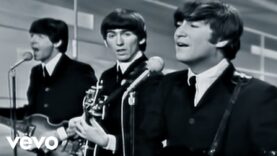 ‘I Want to Hold Your Hand’ was the first Beatles’ record to top both the UK and the US charts. It was also their first to be recorded on a 4-track, as opposed to the usual 2-track, tape machine. The Beatles had the song well rehearsed when they made the first of 17 takes on October 17th 1963.

Following The Beatles’ historic appearance on The Ed Sullivan show on February 9th, the single – already at No.1 in the charts – gained further momentum. They taped a performance of the song earlier in the day of their live appearance and it was shown on the Sullivan show of February 23rd, which helped maintain the song’s popularity. This avalanche of publicity, engineered by Brian Epstein, helped the single to stay at the top for seven weeks, which made it the longest-running No.1 of their career to date (until ‘Hey Jude’).

The Beatles – Eight Days A Week

The Beatles – Ticket To Ride

The Beatles – Lucy In The Sky With Diamonds (Take 1 / Audio)

Do You Want To Know A Secret