You gave them all those old time stars
Through wars of worlds – invaded by Mars
You made them laugh, you made them cry
You made us feel like we could fly
(Radio)

[Pre-Chorus]
You had your time, you had the power
You’ve yet to have your finest hour
Radio (Radio)

[Verse 2]
We watch the shows, we watch the stars
On videos for hours and hours
We hardly need to use our ears
How music changes through the years

[Pre-Chorus]
You had your time, you had the power
You’ve yet to have your finest hour
Radio (Radio)

[Outro]
You had your time, you had the power
You’ve yet to have your finest hour
Radio (Radio)

“Radio Ga Ga” is a 1984 song performed and recorded by the British rock band Queen, written by their drummer Roger Taylor. It was released as a single with “I Go Crazy” by Brian May on the original B-side (3:42) and was included on the album The Works. The song also features on the band’s compilation albums, Greatest Hits II, and Classic Queen.[3]

The single was a worldwide success for the band, reaching number one in 19 countries, number 2 in the UK Singles Chart and the Australian ARIA Chart, and number 16 on the Billboard Hot 100 in the US.[4][5] The band performed the song at every concert from 1984 to their last concert with lead singer Freddie Mercury in 1986, including their performance at Live Aid in 1985.[6][7][8][9] 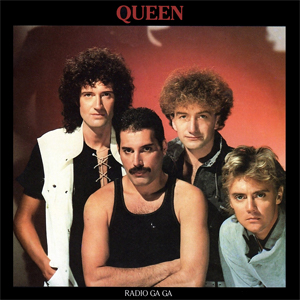 Recorded in 1983 and released in January 1984, the song was a commentary on television overtaking radio’s popularity and how one would listen to radio in the past for a favourite comedy, drama, or science fiction programme. It also pertained to the advent of the music video and MTV, which was now competing with radio as an important medium for promoting records. Ironically, Queen had done much to popularize the music video with “Bohemian Rhapsody” in 1975 and the video for “Radio Ga Ga” would receive a Best Art Direction nomination.[11] Roger Taylor was quoted:

That’s part of what the song’s about, really. The fact that they [music videos] seem to be taking over almost from the aural side, the visual side seems to be almost more important.[12]

Taylor originally conceived of it as “Radio caca” (from something his toddler son once said),[13] which doubled as a criticism of radio for the decrease in variety of programming and the type of music being played.[4] “Radio Ga Ga” in one of the original cassette boxes is called “radio ca ca”.[14]

The song makes reference to two important radio events of the 20th century; Orson Welles‘ 1938 broadcast of H.G. Wells‘ The War of the Worlds in the lyric “through Orson Welles/invaded by Mars”, and Winston Churchill‘s 18 June 1940 “This was their finest hour” speech from the House of Commons, in the lyric “You’ve yet to have your finest hour”.[15]

The inspiration for this song came when Roger Taylor heard his son utter the words “radio ca-ca” while listening to a bad song on the radio while they were in Los Angeles. After hearing the phrase, Taylor began writing the song when he locked himself in a room with a Roland Jupiter-8 and a drum machine. He thought it would fit his solo album, but when the band heard it, John Deacon wrote a bassline and Freddie Mercury reconstructed the track, thinking it could be a big hit. Taylor then took a skiing holiday and let Mercury polish the lyrics, harmony, and arrangements of the song. Recording sessions began at Record Plant Studios and included Canadian session keyboardist Fred Mandel, who later on would work with Supertramp and Elton John. Mandel programmed the Jupiter’s arpeggiated synth-bass parts. The recording features prominent use of the Roland VP330+ vocoder. The bassline was produced by a Roland Jupiter-8, using the built-in arpeggiator.[16]

David Mallet‘s music video for the song features scenes from Fritz Lang‘s 1927 German expressionist science fiction film Metropolis[17] and was filmed at Carlton TV Studios and Shepperton Studios, London, in November 1983. It features the band in a car flying over the title city, and later performing the song in front of the city’s working class. Freddie Mercury’s solo song “Love Kills” was used in Giorgio Moroder‘s restored version of the film, and in exchange Queen were granted the rights to use footage from it in their “Radio Ga Ga” video. However, Queen had to buy performance rights to the film from the communist East German government, which was the copyright holder at the time.[18] At the end of the music video, the words “Thanks To Metropolis” appear. The video also features footage from earlier Queen promo videos.[17]

Queen finished their sets before the encores on The Works Tour with “Radio Ga Ga” and Mercury would normally sing “you had your time” in a lower octave and modify the deliveries of “you had the power, you’ve yet to have your finest hour” while Roger Taylor sang the pre-chorus in the high octave. Live versions from the 1984/85 tour were recorded and filmed on the concert films Queen Rock in Rio 1985, and Final Live in Japan 1985.[19] As heard on bootleg recordings, Deacon can be heard providing backing vocals to the song; it is one of the very few occasions he sang in concert.

“I remember thinking ‘oh great, they’ve picked it up’ and then I thought ‘this is not a Queen audience’. This is a general audience who’ve bought tickets before they even knew we were on the bill. And they all did it. How did they know? Nobody told them to do it.”

—Brian May on the audience participation in clapping to “Radio Ga Ga” at Live Aid.[20]

Queen played a shorter, up-tempo version of “Radio Ga Ga” during the Live Aid concert in July 1985 at Wembley Stadium, where Queen’s “show-stealing performance” had 72,000 people clapping in unison.[6][21] It was the second song the band performed at Live Aid after opening with “Bohemian Rhapsody“.[7][22] “Radio Ga Ga” became a live favourite thanks largely to the audience participation potential of the clapping sequence prompted by the rhythm of the chorus (copied from the video). Mercury sang all high notes in this version. The song was played for the Magic Tour a year later, including twice more at Wembley Stadium; it was recorded for the live album Live at Wembley ’86, VHS Video and DVD on 12 July 1986, the second night in the venue.[9]

Paul Young performed the song with Queen at the Freddie Mercury Tribute Concert again at Wembley Stadium on 20 April 1992.[23] At the “Party at the Palace” concert, celebrating Queen Elizabeth II’s Golden Jubilee in 2002, “Radio Ga Ga” opened up Queen’s set with Roger Taylor on vocals and Phil Collins on the drums.[24]

This song was played on the Queen + Paul Rodgers Tour in 2005–2006 and sung by Roger Taylor and Paul Rodgers. It was recorded officially at the Hallam FM Arena in Sheffield on 5 May 2005. The result, Return of the Champions, was released on CD and DVD on 19 September 2005 and 17 October 2005. It was also played on the Rock the Cosmos Tour during late 2008, this time with only Rodgers on lead vocals. The concert album Live in Ukraine came as a result of this tour, yet the song is not available on the CD or DVD versions released 15 June 2009. This performance of “Radio Ga Ga” is only available as a digital download from iTunes. It was again played on the Queen + Adam Lambert Tour with Adam Lambert on lead vocals.

American pop singer Lady Gaga credits her stage name to this song.[57][58] She stated that she “adored” Queen, and that they had a hit called ‘Radio Gaga’. “That’s why I love the name”, she said.[59]