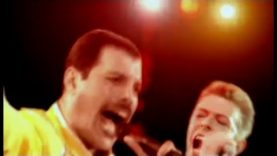 “This remix is very close to the final album version. The bass lines seem to be a bit more prominent in the mix and the overall sound is a little less muddy. Freddie singing “that’s okay!” has been removed right before Bowie sings, “it’s the terror of knowing…” It is unknown who did this remix. It is rumored that this is actually an old mix from around the Hot Space time period”.
Info taken from http://www.QueenVault.com

This video is a new mix between the Wembley version (12/7/86), the Freddie Mercury Tribute Concert version at the same stadium in 1992, and the now old video made by DoRo for Under Pressure (Rah Mix) in 1999.