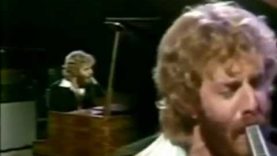 Mash up of live videos to the album track of Lonely Boy from Andrew’s album “What’s Wrong With This Picture.” Video by http://www.mctomkat.com/
Lonely Boy – produced by Peter Asher.
Andrew is known for being a singer, songwriter, musician and arranger. His works include the Top 10 single “Lonely Boy” (1977), as well as “Thank You for Being a Friend” (1978) and “Never Let Her Slip Away” (1978).
Gold was a multi-instrumentalist who played guitar, bass, keyboards, accordion, synthesizer, harmonica, saxophone, flute, drums and percussion, as well as more arcane musical devices such as ukulele, musette, and harmonium.[1] He was also a producer, sound engineer, film composer, session musician, actor, and painter.

He played a major role as multi-instrumentalist and arranger for Linda Ronstadt’s breakthrough album, 1974’s Heart Like a Wheel, and her next four albums. Among other accomplishments, he played the majority of instruments on “You’re No Good,” Ronstadt’s only #1 single on the Billboard Hot 100, and the same on “When Will I Be Loved,” “Heat Wave” and many other classic hits.

America – I Need You

Rod Stewart – I Don’t Want To Talk About It (from One Night Only! Live at Royal Albert Hall)