What went down at Le Trèfle Lozérien. | Enduro 2018 | FULL RECAP 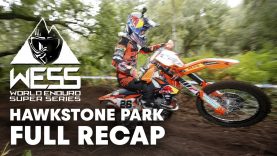 Josep García claimed a start-to-finish win at round six of the World Enduro Super Series at Great Britain’s legendary Hawkstone Park.
Fastest through the trees at the sixth stop of WESS, Josep García was simply untouchable, as he stormed to victory in the punishing two-and-a-half hour Original Fast Eddy Cross-Country, leading home Nathan Watson and Billy Bolt. Finishing third on the day, Bolt also becomes the new championship leader with two rounds remaining.
For García the race was a textbook a start-to-finish win, but behind him the battle was raging. For the majority of the race, Watson and Bolt went back and forth, continually swapping positions. After the pitstop, Watson found a bit more pace on the gruelling sandy woodland whoops and managed to break free from the attacks of Bolt to claim second and his first podium result of 2018.

The World Enduro Super Series continues with round six at Sweden’s Gotland Grand National on October 26/27 where up to 3,000 riders are expected to compete.

Experience the world of Red Bull Motorsports like you have never seen it before. With the best motorsport videos on the web and original series, prepare for your “stoke factor” to be at an all time high.

Get the FREE Red Bull TV apps for all your devices: http://onelink.to/yfbct7