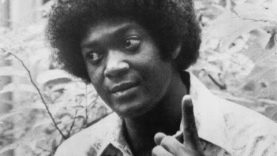 “Drift Away” is a song written by Mentor Williams and originally recorded by John Henry Kurtz on his 1972 album Reunion. In 1973 the song became Dobie Gray’s biggest hit, peaking at number five on the Billboard Hot 100, though it did not enter the charts in the United Kingdom. A new version by Uncle Kracker, with Gray, became a major hit in 2003.

This song is also a famous “goodbye” or ending song for concerts. Its use is often as filler for a last song, usually in preparation for an encore, since it has a catchy beat and a guitar solo can be easily added to the end of the song in order to spice things up before the encore. As such, many live covers have been performed by a multitude of bands and it has become a hit among soft rock fans. Appropriately, it was the final pop hit for Decca Records in the United States.

Gray’s version of “Drift Away” remains a staple on many classic rock and oldies stations.

Dobie Gray (July 26, 1940 — December 6, 2011) was an American singer and songwriter, whose musical career spanned soul, country, pop, and musical theater. His hit records included “The ‘In’ Crowd” in 1965 and “Drift Away”, which was one of the biggest hits of 1973, sold over one million copies, and remains a staple of radio airplay

On December 6, 2011, Gray’s official website stated that he had died. According to the Associated Press, he died at his home in Nashville, Tennessee after a long battle with cancer. Sources differed as to his age; his official site stated he was 71, while the AP stated he was 69

Day after day I’m more confused
So I look for the light in the pouring rain
You know that’s a game that I hate to lose
I’m feelin’ the strain, ain’t it a shame

I do not own the copyright to the music/images. This is just a fan made video for a truly magical song 🙂 R.I.P Dobie Grey and R.I.P all those musical legends whose music has touched so many.

Harry Nilsson Without You 1972 HD

Nirvana – Come As You Are

Poison – Every Rose Has Its Thorn (Official Video)

System Of A Down – Chop Suey!