[Verse 1]
You want commitment
Take a look into these eyes
They burn with fire
Until the end of time
I would do anything
I’d beg, I’d steal, I’d die
To have you in these arms tonight
Baby I want you
Like the roses want the rain
You know I need you
Like a poet needs the pain
I would give anything
My blood, my love, my life
If you were in these arms tonight

[Verse 3]
Your clothes are still scattered
All over our room
This whole place still smells like
Your cheap perfume
Everything here reminds me of you
And there’s nothing
That I wouldn’t do
And these were our words
They keep me strong, baby!

[Outro]
If you were in these arms tonight [x3]

“In These Arms” is a song by American rock band Bon Jovi. It was written by Jon Bon Jovi, Richie Sambora, and David Bryan. It was released in May 1993 as the third single from the band’s 1992 album Keep the Faith. 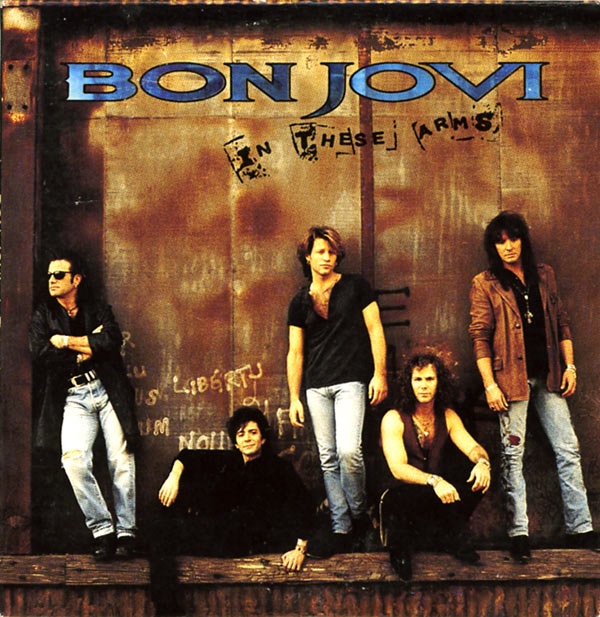 The song’s lyrics are about everlasting love and devotion. The song is characterized by a strong bass rhythm, jangling guitars, and very light drum playing, as well as soulful, emotional singing by Jon Bon Jovi. However, it is not a ballad, as its driving guitars and fast-paced beat and upbeat sound maintain it as more of a pop-rock song, in the vein of “Born to Be My Baby“.

The video for the song shows Bon Jovi performing at a concert on their Keep the Faith Tour. The live portions were filmed during Bon Jovi’s New Year’s Eve show at Stabler Arena in Bethlehem, Pennsylvania on December 31, 1992. The live show was also featured on their previous track “Bed of Roses“. Portions of the video were also filmed at the Dane County Coliseum in Madison, Wisconsin in March 1993.

The song has always been a fan favorite, and was a staple in the band’s setlist on their Have A Nice Day Tour, and also was played frequently on the Lost Highway Tour, especially on the European leg of the tour. The song was also recorded by the band’s keyboard player David Bryan on his first solo album On a Full Moon released in 1995, and again, this time with him singing vocals, on his second solo album Lunar Eclipse released in 2000.