Nirvana – Come As You Are

Janis Joplin – Piece Of My Heart

TO LOVE SOMEBODY by Janis Joplin 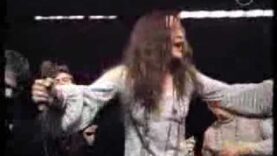 Woodstock ’69 –
Joplin appeared at Woodstock in the late hours of Saturday, August 16, 1969. She performed until the early morning hours of Sunday, August 17. Despite her reportedly not even knowing of the festival’s existence, the Woodstock promoters were advertising her as a headliner. She thus became one of the main attractions of the historic concert.

Joplin informed her band that they would be performing at the concert as if it were just another gig. When she and the band were flown in by helicopter with the pregnant Joan Baez and her mother from a nearby motel to the festival site and Joplin saw the enormous crowd, she instantly became incredibly nervous and giddy. Upon landing and getting off the helicopter, Joplin was approached by reporters asking her questions. She deferred them to Caserta as she was too excited to speak. Initially Joplin was eager to get on the stage and perform, but she kept getting delayed as bands were contractually obliged to perform before her. Faced with a ten-hour wait after arriving at the backstage area, she shot heroin with Caserta and was drinking alcohol, so by the time she hit the stage, she was “three sheets to the wind”.Joplin took the stage following Creedence Clearwater Revival. On stage her voice became slightly hoarse and wheezy and she found it hard to dance.

Throughout her performance she frequently spoke to the crowd, asking them if they had everything they needed and if they were staying stoned. She pulled through, however, and the audience was so pleased they cheered her on for an encore, to which she replied and sang “Ball and Chain”. Her performances of “Kozmic Blues” and “Work Me, Lord” at Woodstock are notable, though her voice breaks while she sings.

Janis Joplin – Piece Of My Heart

TO LOVE SOMEBODY by Janis Joplin

Shania Twain – From This Moment On

Smokie – Lay Back in the Arms of Someone (Official Video)

Eurythmics – Sweet Dreams (Are Made Of This) (Official Video)

The Beatles – I’m a Loser