[Verse 1]
There was a time
When I was so broken hearted
Love wasn’t much of a friend of mine
The tables have turned, yeah
Cause me and them ways have parted
That kind of love was the killin’ kind
Now listen
All I want is someone I can’t resist
I know all I need to know by the way that I got kissed

[Bridge]
Now there’s not even breathing room
Between pleasure and pain
Yeah, you cry when we’re making love
Must be one and the same

[Verse 2]
It’s down on me
Yeah I got to tell you one thing
It’s been on my mind
Girl, I gotta say
We’re partners in crime
You got that certain something
What you give to me
Takes my breath away
Now the word out on the street
Is the devil’s in your kiss
If our love goes up in flames
It’s a fire I can’t resist

[Bridge II]
Cause what you got inside
Ain’t where your love should stay
Yeah, love, sweet love, ain’t love
‘Til you give your heart away

“Cryin’” is a power ballad by American hard rock band Aerosmith. It was written by Steven Tyler, Joe Perry, and Taylor Rhodes. It was released by Geffen Records on June 20, 1993 as a single from their April release, Get a Grip. The single went gold and sold 600,000 copies.[2][3] The song’s music video features Alicia Silverstone, Stephen Dorff and Josh Holloway.

The music video for the song, directed by Marty Callner, features the first appearance of Alicia Silverstone in the band’s videos, as well as the band performing in the Central Congregational Church in Fall River, Massachusetts. The song flashes back and forth between the band and Alicia Silverstone, who plays a teen who has a falling out with her boyfriend (played by Stephen Dorff) after catching him cheating. She feigns an attempt to kiss him, but instead leans away annoying him. She then punches him and shoves him out of the car leaving him in the dust. She begins a phase of rebellion and individuality and gets a navel piercing, which has largely been credited as introducing navel piercing to mainstream culture.[16] After having her purse stolen by another young man (played by then-unknown Josh Holloway of Lost), she chases him down and knocks him to the ground. The video then cuts to her standing on the edge of an overpass bridge, contemplating jumping. Her ex-boyfriend arrives on the scene, along with numerous police officers, encouraging her to come down from the overpass. She jumps, but a rope is revealed, arresting her fall and leaving her dangling over the freeway, laughing at Dorff’s character. The video ends with the dangling Silverstone looking up at Dorff and giving him the finger.

The video was a smash success on MTV, becoming one of the most requested videos in 1993, and earning the band several awards at the Video Music Awards. 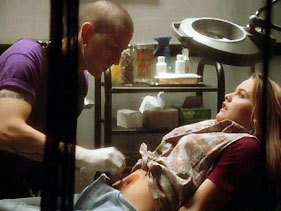 A screenshot of Alicia Silverstone‘s character getting a navel piercing in the music video for “Cryin'”.

Stream a playlist of their biggest tracks: http://playlists.udiscovermusic.com/playlist/aerosmith-best-of