I’ve played all my cards
And that’s what you’ve done, too
Nothing more to say
No more ace to play

The winner takes it all (Takes it all)
The loser has to fall (Has to fall)
It’s simple and it’s plain (It seems plain)
Why should I complain? (Why complain)

[Verse 3]
But tell me, does she kiss
Like I used to kiss you?
Does it feel the same
When she calls your name?

Somewhere deep inside
You must know I miss you
But what can I say?
Rules must be obeyed 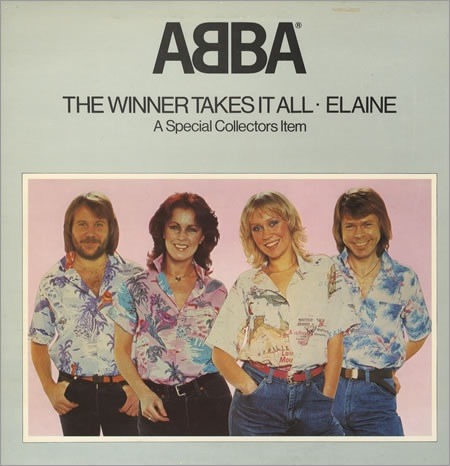 “The Winner Takes It All” is a song recorded by the Swedish pop group ABBA. Released as the first single from the group’s Super Trouper album on 21 July 1980, it is a ballad in the key of F-sharp major, reflecting the end of a romance. The single’s B-side was the non-album track “Elaine“.

“The Winner Takes It All” – which had the original demo title “The Story of My Life” – was written by Björn Ulvaeus and Benny Andersson, with Agnetha Fältskog singing the lead vocal.

Ulvaeus denies the song is about his and Fältskog’s divorce, saying the basis of the song “is the experience of a divorce, but it’s fiction. There wasn’t a winner or a loser in our case. A lot of people think it’s straight out of reality, but it’s not”.[1] American critic Chuck Klosterman, who says “The Winner Takes It All” is “[the only] pop song that examines the self-aware guilt one feels when talking to a person who has humanely obliterated your heart” finds Ulvaeus’ denial hard to believe in light of the original title.[2]

Track in ABBA Gold Greatest Hits MTV History 2000 in Halahup Invisible ,,The Winner Takes It All is 3:24 time.

Fältskog has also repeatedly stated that though “The Winner Takes It All” is her favorite ABBA song and that it has an excellent set of lyrics, the story is not that of her and Ulvaeus: there were no winners in their divorce, especially as children were involved.

The Societetshuset in Marstrand town, where the music video was filmed in the summer of 1980. Photography from 2013.

A music video to promote the song was filmed in July 1980 on Marstrand, an island on the Swedish west coast. It was directed by Lasse Hallström.

“The Winner Takes It All” was a major success for ABBA, hitting #1 in Belgium, Ireland, the Netherlands, South Africa and the United Kingdom. It reached the Top 5 in Austria, Finland, France, West Germany, Norway, Sweden, Switzerland and Zimbabwe, while peaking in the Top 10 in Australia, Canada, Italy, Spain and the United States (where it became ABBA’s fourth and final American Top 10 hit, peaking at #8; the song spent 26 weeks on the Billboard Hot 100 chart, more than any other ABBA single).[3] It was also the group’s second Billboard Adult Contemporary #1 (after “Fernando“).[4] “The Winner Takes It All” was also a hit in Brazil: it was included on the soundtrack of “Coração Alado” (“Winged Heart”), a popular soap opera in 1980, as the main theme.

The track was listed as the 23rd most popular single on the US Billboard year-end chart for 1981.[5]

The song is also featured in the ABBA-based musical and film, Mamma Mia! where it is performed by Meryl Streep.