[Verse 1]
Can you hear the drums, Fernando?
I remember, long ago, another starry night like this
In the firelight, Fernando
You were humming to yourself and softly strumming your guitar

I could hear the distant drums, and sounds of bugle calls were coming from afar…

[Verse 2]
They were closer now, Fernando
Every hour, every minute seemed to last eternally
I was so afraid, Fernando
We were young and full of life and none of us prepared to die

[Chorus 1]
There was something in the air that night
The stars were bright, Fernando
They were shining there for you and me
For liberty, Fernando

[Verse 3]
Now we’re old and grey, Fernando
Since many years I haven’t seen a rifle in your hand
Can you hear the drums, Fernando?
Do you still recall the frightful night we crossed the Rio Grande?

I can see it in your eyes, how proud you were to fight for freedom in this land…

[Chorus 2]
There was something in the air that night
The stars were bright, Fernando
They were shining there for you and me
For liberty, Fernando

If I had to do the same again
I would, my friend, Fernando…

[Chorus 3]
There was something in the air that night
The stars were bright, Fernando
They were shining there for you and me
For liberty, Fernando

“Fernando” is a song by the Swedish pop group ABBA. It was the group’s first non-album single and was released in March 1976 through Polar Music. The track was featured on the 1976 compilation album Greatest Hits in most countries, but was included on the group’s fourth studio album Arrival in Australia and New Zealand. “Fernando” is also featured on the multi-million selling Gold: Greatest Hits compilation. The song was to become one of ABBA’s best-selling singles of all time, with six million copies sold in 1976 alone.[1] It is one of fewer than forty all-time singles to have sold 10 million (or more) physical copies worldwide, making it one of the best selling singles of all time.

“Fernando” was not originally released as an ABBA song but by band member Anni-Frid Lyngstad. It was featured on her No. 1 Swedish solo album Frida ensam (1975). The song was composed by Benny Andersson and Björn Ulvaeus and carried the working title of “Tango”. Preparations for recording began in August 1975. The writers made last-minute changes to the title before recording.[2] The suggestion of the name “Fernando” was given by their limousine driver Peter Forbes in Shepperton, England.[citation needed]

The original Swedish-language version’s lyrics were written by ABBA’s manager Stig Anderson and differ substantially from the English-language version. In the original, the narrator tries to console the heartbroken Fernando, who has lost his great love. “The sorrow can be hard to bear, but the fact that friends let us down is something we all have to cope with”. The chorus’ lyrics are: “Long live love, our best friend, Fernando. Raise your glass and propose a toast to it; to love, Fernando. Play the melody and sing a song of happiness. Long live love, Fernando”. 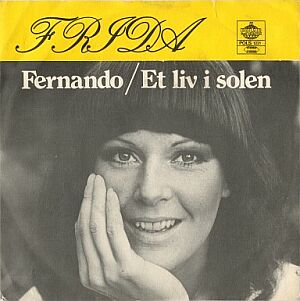 The English version, with completely different lyrics by Björn Ulvaeus, presents a vision of nostalgia for two veterans reminiscing in old age about a long ago battle in which they participated. “I wrote all the songs as little stories. “Fernando” was about two old freedom-fighters from the war between Texas and Mexico. I was lying outside one summer night, looking at the stars and it suddenly came to me”.[3] “I knew that the title ‘Fernando’ had to be there, and after pondering a while, I had this vivid image in my mind of two old and scarred revolutionaries in Mexico sitting outside at night talking about old memories”.[3] The Mexican Revolution of 1910 began on 20 November of that year when a small force of revolutionaries led by Francisco Madero crossed the Rio Grande, from Texas to Mexico.[4]

The B-side to “Fernando” was the song “Hey, Hey, Helen”, a track from the group’s self-titled third studio album (1975), although in some countries “Tropical Loveland” (also from the album ABBA) was used instead. Some copies of the single use “Rock Me” or “Dance (While the Music Still Goes On)” as a B-side.

The title and rhythm of the song made it an obvious choice for inclusion on ABBA’s Spanish album, Gracias Por La Música. The lyrics were translated into Spanish by Mary McCluskey and recorded at Polar Music Studio on 3 January 1980. The song was released as a promotional single in Spain. The lyrics, while adapted for rhythm and rhyme, carry the same sentiment and roughly the same meaning as the English version: “There was something in the air that night, the stars were bright, Fernando. They were shining there for you and me, for liberty, Fernando” becomes “Something was around us perhaps of clarity Fernando, that shone for us two in protection, Fernando” (“Algo había alrededor quizá de claridad Fernando, que brillaba por nosotros dos en protección, Fernando”.)

“Fernando” would become one of ABBA’s best-selling singles upon its release in March 1976, topping the charts in at least 13 countries, and selling over 10 million copies worldwide.[5] It was the longest-running No. 1 in Australian history (spending 14 weeks at the top and 40 weeks on the chart), and remained so for over 40 years, until it was surpassed by Ed Sheeran‘s “Shape of You“, which achieved 15 weeks at No. 1 in May 2017.[6][7] “Fernando” also reached the top of the charts in Austria, Belgium, France, Germany, the United Kingdom, Hungary, Ireland, Mexico, the Netherlands, New Zealand, South Africa and Switzerland. It was also a Top 5 hit in ABBA’s native Sweden (although Lyngstad’s version was No. 1 on Sweden’s radio chart for nine weeks), Finland, Norway, Spain, Canada and Rhodesia.

The track became ABBA’s fourth Top 20 hit on the U.S. Billboard Hot 100, peaking at No. 13. [8] It also reached No. 1 on the Billboard Adult Contemporary chart, the first of two chart-toppers for ABBA on this chart (the second being “The Winner Takes It All“). The song remains an airplay staple on American radio stations specializing in the MOR, adult standards and easy listening formats.

The song was also chosen as the “Best Studio Recording of 1975”, ABBA’s first international prize.