A Guide To American Football

Four Dimensional Maths: Things to See and Hear in the Fourth Dimension – with Matt Parker

Yanny or Laurel – Pitch Changed to Hear Both 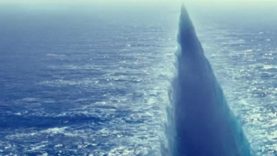 The Seven Wonders of the Natural World may have been named too quickly. Wonders like The Grand Canyon and Victoria Falls are certainly big, and anyone who sees them will surely be impressed—but sheer size isn’t enough to truly leave a person in awe.
There are other places in this world, though, that are far stranger. Places that seem almost alien, as if they could only exist on a planet that evolved separately from our own. These are places that scientists have had to struggle just to understand how they ever could have been formed. Places that will truly make you wonder—not just because they’re beautiful, but because they seem to follow scientific laws that don’t exist anywhere else on earth. Here are 10 Scientifically Impossible Places That Actually Exist

WHY DON’T THESE HANGING STONES FALL?

A Guide To American Football

Yanny or Laurel – Pitch Changed to Hear Both